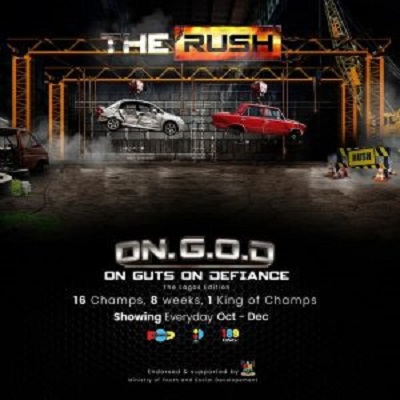 This is contained in a statement issued by Yinka Obebe, Pop Central Television Chief Executive Officer, on Thursday, in Lagos.

Obebe stated that the show would be on screens from October and would run till December.

He added that 16 contestants would be selected after an audition to compete in groups for eight weeks and engage in 39 meticulously designed intensive physical and mental tasks.

“’The Rush’ is designed to be both exciting and intensive; the show will have dedicated task segments, contestants in-residence segment, diary room segment, host driver, and voice over to drive the story.

“Contestants will also be able to earn immunity through various tasks during the weekdays,” he stated.

People are generally intrigued by extreme or intense sports because while most people would not indulge in them, they are in the end captivated by the outcome.

“We have tapped into this to create `The Rush’ reality show that revolves around adventurous content and healthy competition to entertain viewers and keep them at the edge of their seats,” he also stated.

Obebe added that the reality show would be in two stages; the task stage and the chill-out scenario in the residence.

He stated that the live residence segment of the show would reveal the human side of the contestants after the completion of their arduous challenges which would be done outdoors.

According to him, the daily residence segment will be aired as a two-hour recap that will run from 7p.m. to 9p.m. daily and a rerun the following day from 11a.m. to 1p.m. on Pop Central DSTV, Channel 189.

He added that registration to participate was open and interested individuals between the ages of 18 years and 35 years could sign up on the Pop Central television website.

“Partnerships are also open to those willing to take advantage of the fresh twist to reality show programming. The Nigerian audience is quite aware of how reality shows work.