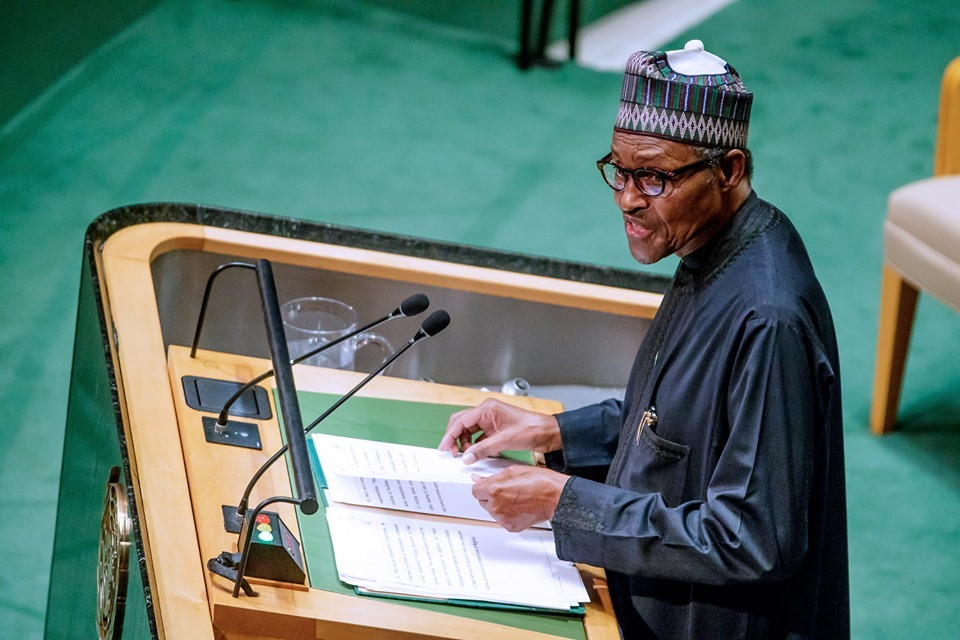 President Muhammadu Buhari spoke on a long list of critical issues on Friday as he addressed world leaders at the 76th Session of the United Nations General Assembly (UNGA76). He took to the podium to address the world leaders after President Nicos Anastasiades of Cyprus at the General Debate of the session at the UN Headquarters in New York, the United States.

The theme for this year’s UNGA is, ‘Building Resilience Through Hope – To Recover from COVID-19, Rebuild Sustainably, Respond to the Needs of the Planet, Respect the Rights of People and Revitalise the United Nations’. In his speech, President Buhari thanked Nigeria’s partners and friends all over the world for their assistance since the outbreak of COVID-19, saying vaccination was the key to the safe emergence from the pandemic.

According to him, the nation fully supports the COVAX initiative from which it has benefitted and is grateful to the United States, Turkey, India, China, European Union, and others for the vaccines provided.

“Despite the acknowledgement, however, I would like to reiterate my call for a fairer and more equitable distribution of vaccines to all countries so that, together, we can fight and contain the pandemic,” the Nigerian leader said.

“The rising wave of newer and more contagious strains makes this even more urgent; no country can afford the socio-economic implications of prolonged shutdown. It is imperative to underscore that no one is safe until everyone is safe.”

On security, he raised concerns over illicit trade, transfer, and circulation of small arms and light weapons.
Their excessive accumulation and uncontrolled spread in many regions of the world, the President stated, were already having devastating humanitarian and socio-economic consequences, especially on the continent of Africa.

He, therefore, called for a worldwide application of the Arms Trade Treaty to codify accountability in conventional arms trade, saying it was critical to the security of nations. President Buhari explained that this was in recognition of the need for a broad-based global partnership in the ongoing battle against transborder crimes, including terrorism and piracy.

He stressed the need not to only deal with the symptoms of conflict but to tackle the immediate causes that fuel crisis, including poor and undemocratic governance, human rights abuses, poverty, ignorance, injustice and inequalities.

“There are no easy solutions to these conditions,” the Nigerian leader told the session. “They require long term investments and more effective international cooperation.

“In this connection, my delegation underscores the importance of promoting peaceful, unfettered, and inclusive participation of states in global actions towards conflict prevention. This will facilitate the achievement of the 2030 Agenda for Sustainable Development and the African Union Agenda 2063.”

The President also drew the attention of the world leaders to the forceful takeover of government in some African countries, noting the events in Guinea and Sudan.

He lamented that such happenings were eroding the democratic gains of past decades, stressing that the recent trend which, sometimes were in reaction to unilateral changes of constitutions by some leaders, must not be tolerated by the international community.

According to the Nigerian leader, Nigeria fully supports the efforts by ECOWAS to address the growing challenge and appreciates the support of both the African Union and the United Nations. He reiterated that leaders of individual member-states must adhere to the constitutional provisions of their countries, particularly on term limits.

On the issue of extremism, he said, “Terrorism continues to dominate security discourse worldwide. In Nigeria, Boko Haram terrorist group, though fragmented by internal strife and weakened by our defence forces, is still active and preying on soft targets.

“Nigeria will continue to work closely with UN Counter-Terrorism bodies and entities with a view to bringing this scourge to an end, Nigeria has spared no effort in addressing the challenges of terrorism posed by the activities of Boko Haram in North-East Nigeria and the Lake Chad region, as well as banditry in the North-West and North-Central Nigeria.”

“The Nigerian Security Forces have recorded considerable success in the fight against terrorism. As a result of the renewed vigour of our military, many terrorist fighters are voluntarily surrendering to our security forces,” he added.