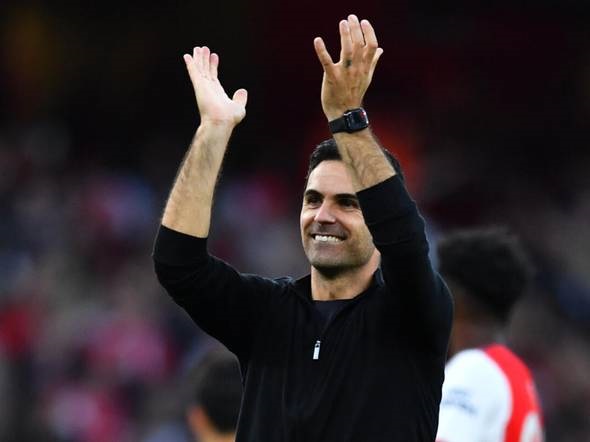 The sound of Arsenal’s joyous fans chanting his name must have been music to the ears of Mikel Arteta on Sunday in London.

This was after his youthful side swept aside London rivals Tottenham Hotspur in a 3-1 victory.

It came a few weeks after some fans were calling for the Spaniard to be shown the door following a calamitous start to the 2021/2022 English Premier League (EPL) season.

Arteta now appears to have turned things around.

Three consecutive defeats, in which they conceded nine goals without scoring, left the 13-times English champions bottom of the table in late August — their worst start in 67 years.

A couple of 1-0 wins over Norwich City and Burnley steadied the ship, but Sunday’s invigorating display had the fans in raptures as Arsenal climbed above Spurs in the table.

And while 10th place is nothing to get excited about, they appear to be heading in the right direction while Tottenham, whose season is a mirror image, are on the slide.

Arteta has spoken in depth about rebuilding a squad for the future and in exciting young talents such as Emile Smith Rowe, Bukayo Saka, Ben White and Kieran Tierney.

Some of their football in a dynamic first half was sensational as goals by Smith Rowe, team captain Pierre-Emerick Aubameyang and Saka swept away a listless Tottenham side.

The fans responded to create a buoyant atmosphere not heard at The Emirates for a long time.

“This win is for the fans. They were there when we needed their support. We started really strongly and were determined. In the second half we had to do what we had to do,” Arteta said.

“It’s a special day. Today is one example of what we want to do. But we have to be consistent.

“We had great determination, great energy and great quality. I really enjoyed it. I see the belief the players have in what we do. They have the quality to put it into practice.”

The 21-year-old Smith Rowe typified the energy in the Arsenal ranks as he scored the first goal and then set up the second for Aubameyang, while Saka, 20, continues to look a gem.

“It’s probably the best day of my life. To have my family here as well, it’s a special feeling,” Smith Rowe said.

“I feel like we’ve worked so hard. We had a tough start to the season. I feel like it’s going really well at the moment, but we need to keep our heads on.”

Messi ruled out of PSG game against Montpellier