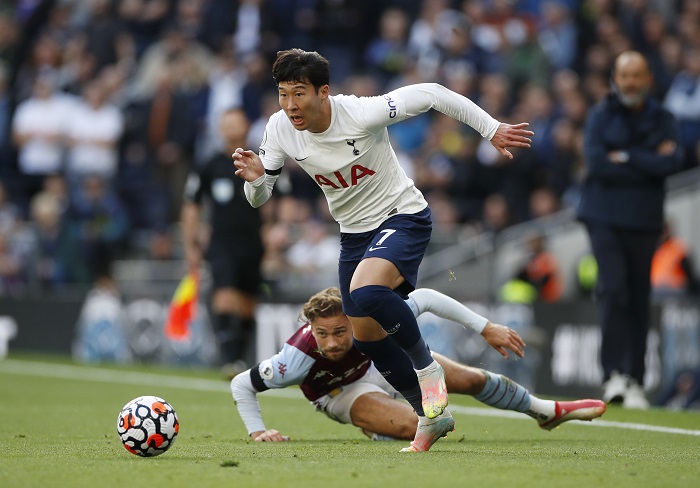 South Korean Son did not add to his three league goals this season but produced a tireless display.

His two assists ensured Tottenham will head into the international break with their tails up after a sticky patch.

His clever pass set up Pierre-Emile Hojberg for Tottenham’s opener in the 27th minute.

Shortly after Villa had drawn level he again left a Villa defence trailing in his wake to deliver a cross that Matt Targett turned into his own net.

Ollie Watkins celebrated his recall to the England squad with Villa’s leveller — his first league goal of the campaign.

Tottenham are still clearly a work in progress under Nuno Espirito Santo, but the performance was a vast improvement on last weekend’s 3-1 defeat at local rivals Arsenal — a third successive loss in which they conceded three goals.

“We needed a win but a well-deserved win. We did a good match against tough opponents. Important for us, the boys and the fans.

“We reacted well after conceding and positive in a lot of ways,” Espirito Santo said.

“Many times we conceded and go flat but this time the team did well. We missed chances to kill the game.”

There was a nervousness about Tottenham in the opening exchanges, but Villa were not able to take advantage and the hosts grew in confidence.

Kane was close to a spectacular opening goal with a quickly-taken free kick from the halfway line which had Villa keeper Emiliano Martinez back-pedalling to keep out.

Son also fired over before he combined with Hojberg down the right and slid a pass across for the Dane to place a side-foot shot into the bottom corner.

Villa began the second half well and Targett had a goal bound effort blocked by Cristian Romero, who impressed after being selected ahead of Davinson Sanchez.

Son volleyed over from a cross by Emerson Royal and out-muscled Ezri Konsa down the left but had his effort from a narrow angle blocked by Martinez.

Villa left back Targett was in the thick of the action and it was his low cross that allowed Watkins to nip in front of Eric Dier to score in the 67th minute.

All eyes were on how a fragile Tottenham would react but thanks to Son they did so in style.

Played in down the left by Sergio Reguilon he left Kortney Hause trailing before threading a low cross to Moura and Targett’s desperate intervention sent the ball into the net.

Kane, who scored a hat-trick against NS Mura in the Europa Conference League in midweek, had chances to kill the game off but was unusually hesitant.

The England striker’s six-game streak without a Premier League goal is his worst run since the 2015-16 campaign.

“I didn’t think there was an awful lot in the match,” Villa boss Dean Smith said.

“They had the outstanding player on the pitch in Son Heung-min, he set up the winner and caused us problems all game.”