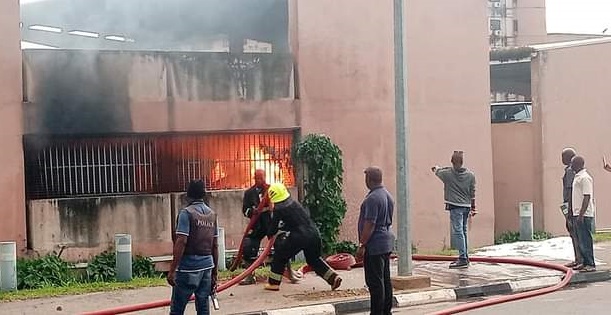 The Federal Capital Territory (FCT) Fire Service has confirmed that a man was left injured after fire gutted the Federal Ministry of Education area of the Abuja Federal Secretariat on Wednesday evening.

FCT Fire Service Public Relations Officer (PRO), Mr Ibrahim Muhammad, told our reporter that the man, yet to be identified as at the time of this report, sustained a leg injury.

“One person who probably decided to work after office hours at the secretariat was injured in the leg but there is no fatality.

“The annex area of the secretariat where Zenith bank is located was affected by the fire but the situation is currently under control with firefighters on ground,” he said.

Muhammad said that men of the fire service had been fighting the fire which affected the registry and records, accounts, pension and variation units since 8:00pm on Wednesday.

“The fire occurred at the second floor and the cause of fire is likely from a split air conditioner but further investigation is on,” he said.

It was also reported that at about 5:00pm there was fire at a car park section of another area of the Federal Secretariat in Abuja.