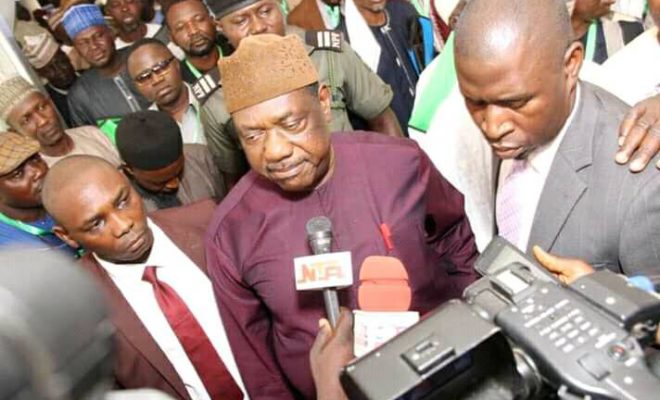 Sen. George Akume, the Minister of Special Duties and Inter-Governmental Affairs, says the race for All Progressives Congress (APC) Chairmanship should not be seen as a do or die affair by contenders.

Akume, a former governor of Benue said this on Thursday in Abuja when he received members of Middlebelt Youth Vanguard who paid him a courtesy visit.

He said that his major concern was for the position to be zoned to the North-Central.

“We are still going on with our state congresses, after that it will be the National Convention. Our prayer is that let this position be zoned to the North-Central.

“I have not declared, but after appropriate consultations and the zoning, we will do the needful. When that occasion arises I will be depending on you. Whoever gets your support is close to getting the victory.

“Also in our zone, we are all committed that whoever emerges will get the support of all of us. It is not a do-or-die affair,” Akume said.

He said that the President Muhammadu Buhari-led Federal Government was committed to youth’s development as demonstrated in the signing of the Not-Too-Young-To-Run Act.

He added that this was also demonstrated in other youths focused programmes being implemented by the administration.

“No nation toils with the destiny of its youths,” Akume said.

The minister said that the administration was committed to the development of the country through infrastructure especially road and rail projects.

He noted that in spite of obvious challenges, the country has done well under the Buhari-led administration, saying that what was needed was the support of Nigerians for it to do more.

Akume thanked the group for the visit and urged members to continue to use the platform to pursue things that unite the region and Nigeria, rather than things that sought to create division in the country.

He advised Nigerian youths to continue to project things that unite the country, which he said were many, stressing, “We are better off as one untied and indivisible nation.”

Earlier, Mr Prince Miaphen, the President of the group, disclosed that Akume has been endorsed as the preferred candidate of the group for the position of APC national chairman.

He said the group endorsed him at the last Executive Council meeting in Plateau because he stood out among other aspirants.

“We are here today to tell you that the Middlebelt Youth Vanguard is adopting you as our candidate for APC national chairman 2021.

“Haven considered the characters and positions of all aspirants from the North-Central and other geo-political zones, we said it would be proper and most appropriate for us to zero-in on one person that will better represent us as a region.

“And the person that has the connection beyond the region that can deliver for APC in the 2023 general elections is Akume.

“This was supported by further nominations and confirmations across virtually the entire North-Central, so we arrived at a consensus that not only should we adopt you, but to also canvas support for you,” he said.

He added that the group would embark on a campaign especially in the North and South to draw support for Akume to ensure that he emerged as the APC national chairman.

It was reported that the group also appointed Akume as its grand patron to replace former Deputy Senate President, Ibrahim Mantu, who died recently.