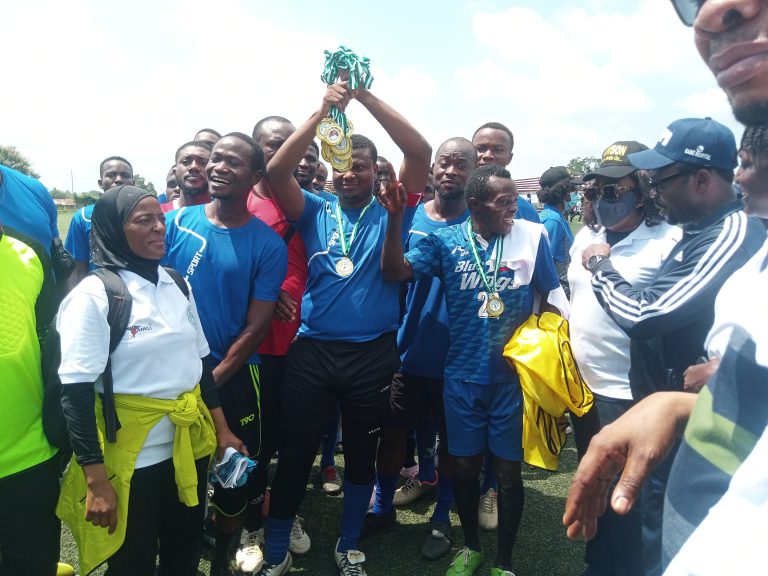 The football match which was played between the NMA FCT chapter football team and Pepsi football academy, Abuja, was part of the activities lined up for the 2021 NMA Physician Week which began Oct. 10.

Speaking before the football match, the Chairman of the NMA FCT chapter, Dr Enema Amodu, stated that the novelty match was organised to immortalized the late medical professor.

He said that late Lawson gave so much to the development of the medical profession, adding that he died when the COVID-19 was at its peak in 2020 while attending to other COVID-19 patients.

Dr Amadu added that the match was also to entrench in every doctor the need for them to continue to take care of themselves as it is part of the advice they usually give to patients.

He said: “Lawson put his work and life on line before he died.”

“We also need to take care of ourselves, we need to exercise, the message I have for doctors is that it is not only COVID-19 that kills, there are other killer diseases.”

“Even though you have your love for the profession, your care for the patient, you also need to protect yourself, and ensure safety under protocol,” he stressed.

Dr Maureen Umemmuo-Umeakuewu, the vice Chairman of the chapter, also described the late doctor as an icon and a master of the medical profession, especially in the NMA FCT chapter.

According to Umemmuo-Umeakuewu, Prof Lawson made NMA FCT What it is today, and he put all his resources both financial and manpower to development of the association.

“I want to use this medium to thank all medical doctors, especially the ones in Abuja, for all their efforts, their commitment, despite the difficult terrain and harsh conditions they find themselves in.”

Umemmuo-Umeakuewu also urged the doctors to put more commitment to their work like Prof Lawson, stressing that they must sacrifice their time, energy and money to make the medical profession better.

Also speaking, Mrs Julian-Olufunke Lawson, wife of the late Lawson, described her husband as a man who love sport generally, and that he was a great footballer.

She appreciated everyone who was present at the novelty football match, adding that, doctors must live by example by regularly exercising themselves to keep fit.

It was also reported that the late Professor, who bagged many awards in the medical profession, was until his death a professor of Clinical Tropical Medicine in the department of community medicine and primary healthcare, Bingham University, Nasarawa state.