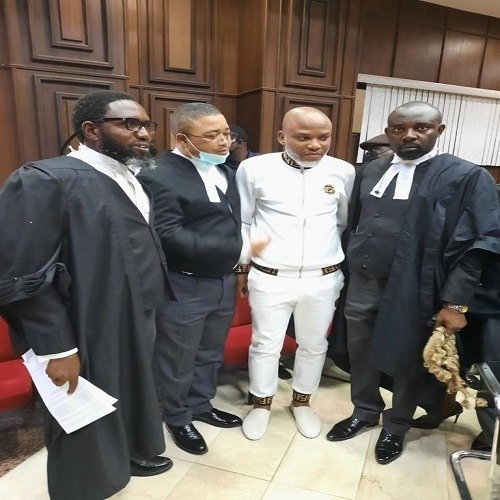 The embattled leader of the proscribed Indigenous People of Biafra (IPOB), Nnamdi Kanu, has pleaded not guilty to the seven amended charges preferred against him by the Federal Government. Kanu, who was re-arraigned at the Federal High Court in Abuja on Thursday, said he was innocent of all the allegations levelled against him. When the charges were read to him, he pleaded not guilty.

According to Channels, in the course of the hearing, the court refused his application for transfer to Kuje Correctional Centre from the DSS facility where he has been held. However, the trial judge, Justice Binta Nyako, allowed three persons of his choice to visit him at the DSS facility. The judge then adjourned the case to November 10 to hear his application, challenging the competence of the charges.

The Federal Government recently amended the charges against him raising them to seven counts as against the five counts he was previously being tried for. The new charges border on treasonable felony and terrorism.

Although Channels Television’s correspondent and six other journalists, were cleared at the main gate of the court to enter the premises, upon arrival at the door leading to the courtroom, armed DSS officers denied the journalists entry. The operatives insisted their action was based on “order from above”.

Meanwhile, a source inside the courtroom, notified court reporters that the embattled IPOB leader took his fresh plea to the seven amended charges at about 10:45 am. Kanu was first arrested in 2015 on charges bordering on terrorism, treasonable felony, managing an unlawful society, publication of defamatory matter, illegal possession of firearms, and improper importation of goods, among others.

He was initially detained and arraigned in court, but he fled the country in 2017 after he was granted bail for medical reasons. The embattled IPOB leader was later sighted in Israel, but he was intercepted on June 27 and repatriated to Nigeria to face the charges for which he was arrested – about four years since he jumped bail.

His repatriation followed an operation conducted by Nigerian security operatives in collaboration with international partners. On July 26, Justice Binta Nyako of the Federal High Court sitting in Abuja adjourned the trial of Kanu until October 21 after the DSS failed to produce him in court.

She faulted the action of the security outfit and asked the prosecution to be diligent with dates whenever she gives one, stressing that it was important for Kanu to be present at his trial.