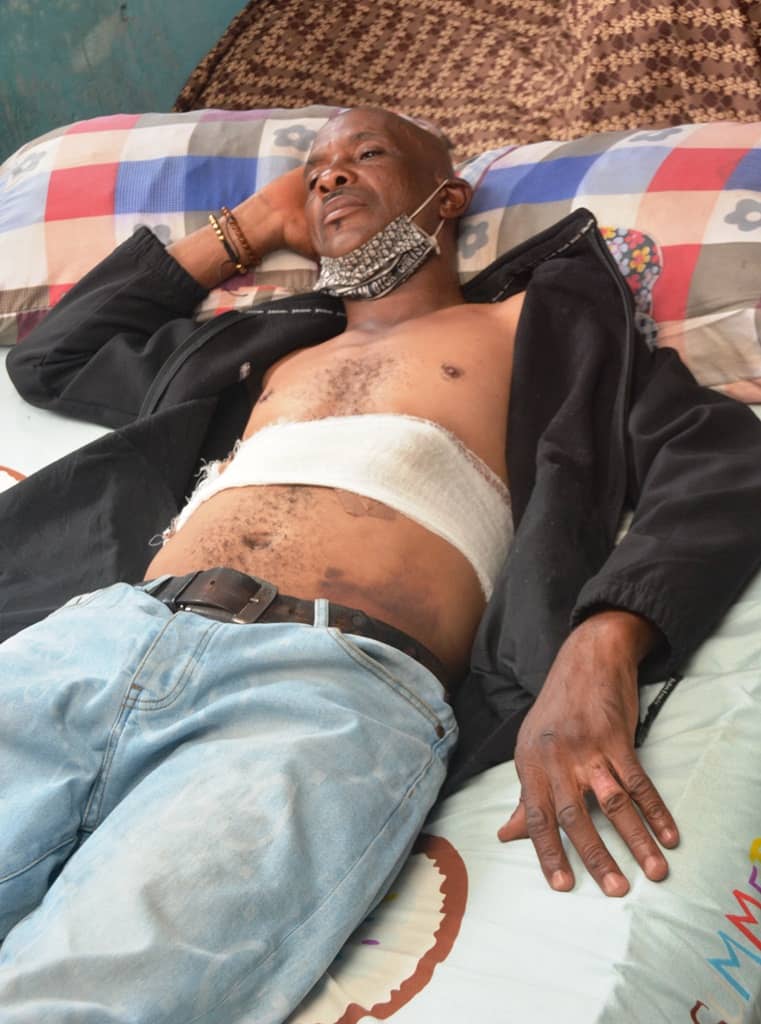 Mr Shina Edun, a victim of #EndSARS protest memorial has appealed to the Lagos State Governor, Mr Babajide Sanwo-Olu, to come to his aid, by footing his medical bills.

He made the appeal on Monday when the management team of LCC made a visit to his residence, at Ifako-Ijaiye area of the state.

Edun was stabbed on Oct. 20, during the first anniversary of #EndSARS protest that took place in 2020 by youths over police brutality.

Hee is undergoing pain as a result of the injury suffered in an attempt to protect LCC gadgets at the plaza.

On his sick bed, Edun, who struggled to utter few words, said that it was God that saved him.

Speaking with journalists at Edun’s residence, the Chief Security Officer of LCC, Mr Solomon Tolofari, appealed to the state government to support the company in taking care of the medical bills of the victim.

”We are here to visit a dedicated personnel of LCC who was stabbed by #EndSARS protesters. On that day, because of the threat by the protesters, we sourced for external security in addition to our dedicated team.”

”We were there when the protesters came in coaster buses, suddenly they disembarked and the Man O’ War team including Shina Edun was asked to stay close to protect the plaza.”

”Before we knew what was going, they stabbed him in the abdomen and we rushed him to the hospital,” Tolofari said.

He said that since the protesters had blocked the road, the management team had to take one way and rushed him to Falomo for immediate medical attention.

Tolofari, however, appealed to the state government to assist the company in taking care of Edun, as he had fallen victim in the course of discharging his duty.

Also speaking, the Head, Commercial and Corporate Media LCC, Mrs Veronica Jacob, said that the company was concerned about the safety and security of it’s staff, hence, the visit.

”We thank God he is alive and he is recovering. We pray we don’t encounter something of this nature again. He has gotten medical attention but we will continue to follow up again,” Jacob said.

An elder brother to Edun, Chief Kehinde Yusuf, also appealed to the state government to come to the aid of the family.

Yusuf said that his brother suffered serious pain as a result of the injury, adding the bleeding was too much initially and he was unconscious.

It would be recalled that a suspect was caught with dangerous weapons at the Lekki Toll Gate plaza during the #EndSARS protest memorial.

Some items recovered from the suspect included cutlasses and charms, among others, and he did confess to the police that he was there to cause mayhem.

Speaking on the arrest, Gov. Sanwo-Olu commended the Nigerian Police for living up to its responsibility, adding that there was the need to continue to work with the Police.

”If they hadn’t caught this fellow, we might not be able to quantify what his intentions are or what his other collaborators who might have escaped would do,” he said.

FG set to scale up contribution of livestock to GDP – Minister