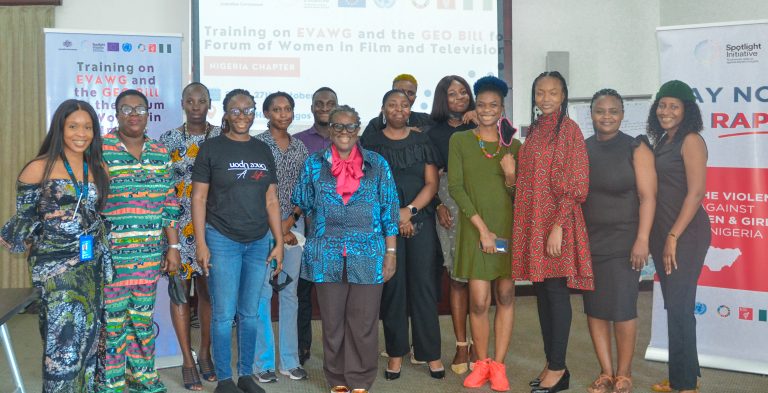 UN Women and Women in Film and Television International (WIFTI), Nigeria Chapter on Wednesday advocated for the ending of violence against women.

The groups, in partnership with Spotlight Initiative during a 2-day Workshop on eliminating violence against women and girls also advocated for the successful passage of the Gender and Equal Opportunity Bill (GEOB).

Speaking at the workshop, UN Women Representative to Nigeria and ECOWAS, Ms. Comfort Lamptey said UN Women will be collaborating with senior leaders of WIFTI, Nigeria Chapter, to leverage on momentum toward the second reading of the GEOB.

Lamptey said the collaboration will position the network to advocate for an increase women’s political representation and address violence against women and girls as women in film and television and wider society.

“The collaboration will also seek to leverage on WIFTI’s convening power to support the film and TV industry to structure products to champion gender equality in Nigeria.”

“This workshop will serve as a platform to increase awareness of the Bill and garner support toward its’s successful passage.”

“In the same vein, the workshop will focus on advocacy around ending gender-based violence and violence against women and girls.”

“It will also be loking at concepts of gender in Nigeria as well as effectively integrating key advocacy messages, transformative story lines and powerful portrayal of women and girls in TV, film, and media.” she said.

Lamptey added that the UN Women is dedicated to the empowerment of women and girls, enhancing women’s roles and bridging the gaps of gender inequality.

“Engaging and strengthening platforms for advocacy for Ending Violence Against Women (EVAW) forms a key pillar of our efforts towards achieving a gender equal and peaceful world.” she said.

She also acknowledged the importance of media and entertainment and commended WIFTI for providing a platform for amplifying women’s voices in the movement against Gender Based Violence (GBV) through Nollywood.

“It is my earnest desire and expectation that this workshop will broaden and strengthen the advocacy skills of participants for EVAW and garner the required support towards the passage of the GEOB.” She added.

Mrs Ajoke Silva, Chairman, WIFTI Nigeria Chapter, said WIFTI is convening alongside UN Women to let people within the entertainment industry and women understand the gender issues and all that is behind the Gender and Equal opportunity Bill.

THE Veteran filmmaker said the reason for the workshop is to educate other filmmakers on the issues of gender and equal opportunity which can be injected to their works and messages.

“Most of the people in the room are writers, directors and producers. Most of them work behind the scenes but they are the people who put together the project, the performance they present to the public.”

“The performers are the faces of the project that these people put together. So the strategy is to let the people who actually craft the messaging understand the issues behind the message.” she said.

Dr Abiola Akiyode-Afolabi, a lawyer and civil rights activist from Women Advocates Research and Documentation Centre (WARDC) also spoke on the overview of The Gender and Equal Opportunities Bill.

Akiyode-Afolabi said the workshop is part of awareness creation since it had been realised that very few people know about the Gender and Equal Opportunities Bill (GEOB).

“The level of awareness might also be one of the reason the passage has been so difficult because we didn’t get the kind of support we needed from Nigerians generally.”

“So this is a strategy to ensure that the bill get passed because the bill is very important for Nigerian people. This meeting is also to engage different sectors, stakeholders, media chiefs and the film industry.” she said.

She added that awareness is also being created at the grassroots and the messages are being passed in local languages to ensure the bill gets adequate support.

Akiyode-Afolabi further urged parents and guardians to teach children that the society should benefit both men and women equally and that child preference should be discouraged.

The two-day training which held at Protea Hotel by Marriott in Lagos had 28 participants in attendance.

“Why Fayemi was absent during our visit to Tinubu’s residence” – Gov. Akeredolu