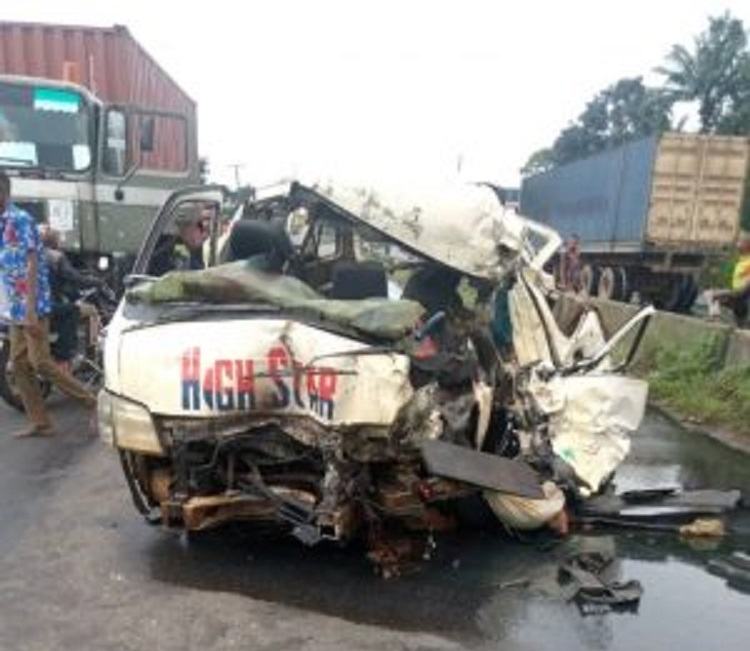 The Federal Road Safety Corps (FRSC) in Anambra said an accident involving two vehicles at Okeohia on Ihialla-Owerri Expressway, has claimed the life of a male adult.
The Sector Commander of the corps, Mr Adeoye Irelewuyi, confirmed the accident to the News Agency of Nigeria (NAN) in Awka, on Sunday.
Irelewuyi said the accident could be attributed to speeding and loss of control.
“The fatal crash involved an unidentified driver of a Nissan commercial bus with registration number NKK 314 VT and unidentified driver of a Trailer with no registration number.
“Eyewitness report indicates that the bus driver was carrying illegal crude oil and was speeding. As a result of excessive speed, he rammed into a stationary trailer.
“The trailer driver on seeing what had happened, immediately entered his vehicle and drove off.
“Five persons were involved in the crash, including four male adults and one female adult.
“The corpse of the bus driver was taken to Our Lady’s Mortuary in Ihiala after he was confirmed dead by the doctor on duty,” he said.
While condoling with the family of the dead, the Sector Commander urged motorist to obey traffic regulations and maintenance safe speed limit to prevent road accidents.
Related Topics:
Up Next

Who wants to be a teacher?