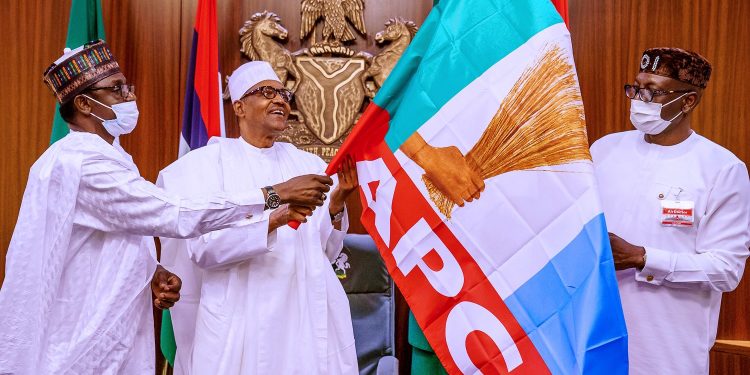 A group, Zamfara State Patriotic Association, has appealed to President Muhammadu Buhari and elders of the All progressives Congress (APC) to save the party from the hands of some dark horses.

Chairman of the group, Alhaji Ibrahim Nabature, made the call while addressing a press conference in Gusau, Zamfara, on Wednesday.

“There are some dark horses trying to destroy the party before the 2023 general elections if things do not go their way,” Nabature alleged.

Nabature said that the association had observed with dismay that some Governors were bent and working to destroy the party if their excesses are not checked.

The association noted that if the excesses of APC Governors were not checked, the party would be history before the 2023 poll.

He cited the crisis rocking the party across several states following the party’s recent congresses as deliberate attempts by some of the governors to destroy the party they used as platforms to get elected.

The chairman appealed to the president and party elders to intervene and rescue the party.

Nabature dismissed rumours making the rounds that former Governor of Zamfara, Abdulaziz Yari Abubakar, a strong contender for the National Chairmanship of APC had defected to the People’s Democratic Party (PDP).

“Alhaji Abdulaziz Yari, a foundation member of the APC, had at no time ever discussed or thought of leaving the party without the knowledge of his true supporters across the country,” he said.

Nabature said the Abdulaziz Yari faction of the APC was in court challenging the dissolution of the Lawal M. Liman-led caretaker committee in Zamfara state.

“Therefore he cannot abandon the party he helped to build for newcomers. It is the handwork of some forces who were his friends now turned enemies.”

“Yari had done so much for Zamfara and the APC in the state and at the national level,” Nabature said.

He fingered some governors, who he described as agents of destruction working to strangulate the party before the 2023 elections due to their selfish reasons.

The association chairman appealed to the party elders to intervene and stop them before they would succeed.

Our correspondent reports that 10 APC local government chairmen in the former Governor Yari faction are challenging their dissolution in a federal high court.