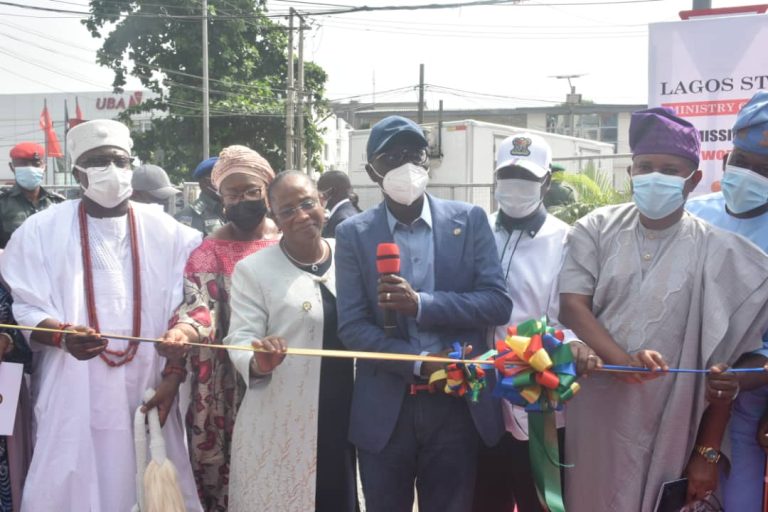 He said Victoria Island used to be one of the cleanest and most orderly
neighborhoods but increased commercial activities and population upsurge led to environmental challenges including flooding and gridlock.

“The failure of many of the drainages and water channels on Victoria
Island has consistently impeded the free flow of traffic, extending
commuting time, causing damage to vehicles, low patronage for
businesses, and generally poorer quality of life for the people who
work and live here.”

“As a responsive government committed to the fulfillment of all electoral promises, we knew we had to do everything necessary to
address and reverse this issue of incessant flooding and all its
consequences in the area,” he said.

He said the reconstruction would boost commerce, interconnectivity and curb gridlock and flooding on the network of roads which serves over 200,000 people daily on the axis which houses several financial institutions.

Sanwo-Olu said the inauguration was to fulfill his campaign promises of inclusive infrastructure delivery, address degeneration and the perennial flooding on the axis in line with his T.H.E.M.E.S Development Agenda.

“A major focus of our Greater Lagos Vision is the prioritisation of
urban renewal and the development of road infrastructure as a
means of enhancing the collective wellbeing of Lagosians.”

“We have adopted an all-inclusive and people-centered approach that
covers rural and urban areas, so that no part of Lagos State is left
out,” he said.

He listed all divisions of the state where roads projects were currently ongoing, adding that, four roads in Ikeja GRA axis are presently at advanced stages of completion and would soon be inaugurated.

He said the upgrade of Adeola Hopewell,
Idowu Taylor, and Afribank/Churchgate streets project awarded in February, 2020 has provided effective drainage system and network, as well as good road connectivity.

“Of the three roads being commissioned today, Adeola Hopewell and Afribank/Churchgate Streets are one-way traffic roads while Idowu Taylor is a two-way street.

“The three roads form a ring-road like pattern that effectively discharges traffic into Sanusi Fafunwa Street and connects back to Adeyemo Alakija Street,” he said.

Special Adviser on Works and Infrastructure, Mrs Aramide Adeyoye, said prior to the reconstruction, the strategic roads were in deplorable state with several complaints.

She said the project was part of the Phase 1 of the Urban Regeneration Programme of the Governor Sanwo-Olu government for the Victoria Island axis while listing recently completed roads on the axis.

Adeyoye listed the scope of work to include site clearance, provision of drains and culverts, interlocking paving stones on walkway and carriageway, transverse and longitudinal service ducts, among others.

She added that the Sanwo-Olu administration has shown a deep sense of responsibility and commitment towards the delivery of roads across the state.

She joined the governor to thank the residents for their patience and also the contractor, Messrs Hi-Tech Construction Company Ltd for an excellent delivery of the project despite the delays caused by the COVID-19 pandemic.

Mrs Wonu Folami, Chairman, Victoria Island and Ikoyi Residents Association, joined other notable leaders and influential politicians from the area to thank the Sanwo-Olu administration for the succuor the project brought while pledging support of the residents to government.