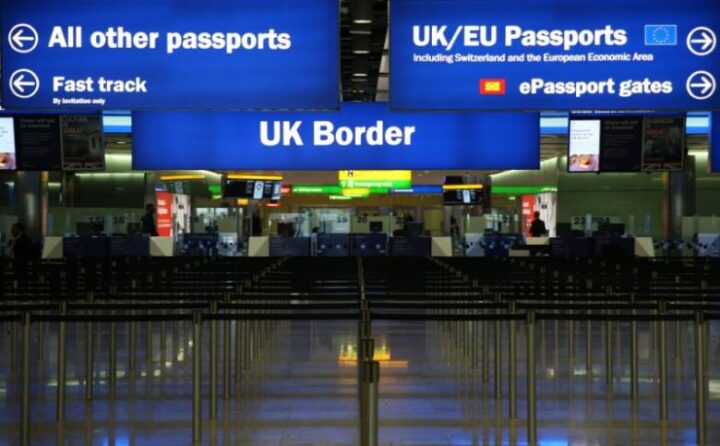 The United Kingdom has announced that Nigeria and 10 other countries would be removed from its red list from Dec. 15, following review of the latest risk assessment from the UK Health Security Agency (UKHSA).

The government of the United Kingdom made this known in a statement on Tuesday in Abuja.

“All 11 countries will be removed from the UK’s red list from 4am Wednesday, Dec. 15 as Omicron becomes the dominant strain around the world.”

“Pre-departure tests and PCR testing measures on or before day 2 after arrival remain in place, with a review of all travel measures in the New Year.”

“Passengers arriving from Nigeria, Angola, Botswana, Eswatini, Lesotho, Malawi, Mozambique, Namibia, South Africa, Zambia, and Zimbabwe will not have to stay in a managed quarantine hotel on arrival in England from this date.”

“As Omicron cases rise in the UK and in countries around the world, the travel red list is less effective in slowing the incursion of the variant from abroad and these temporary measures are no longer proportionate.”

“The red list has successfully served its purpose in delaying the spread of Omicron into the UK to buy time for scientists to learn more about this variant.”

“All vaccinated passengers arriving in the UK must continue to take a pre-departure test two days or less before they depart for the UK and must take a PCR test on or before day 2 and self-isolate until they receive a negative result.”

“These testing measures are vital in helping to prevent any additional cases of Omicron from entering the UK and stopping people from passing it on to others.”

“This is a critical phase in tackling the Omicron and the Government’s focus remains on slowing the spread of the variant in the UK.”

British High Commissioner to Nigeria, Catriona Laing said that Ministers of the UK made the decision to remove Nigeria from the UK’s travel red list based on scientific and public health data .

Laing stated that the emergence of the Omicron variant is a reminder that the COVID-19 pandemic is not over, and like all countries around the world the UK has had to take difficult decisions to protect public health.

“We took this necessary precautionary action to give us time to understand the challenge we and others faced, and to slow down the spread of Omicron, while scientists urgently assessed what impact the variant has on vaccines, treatments and transmissibility.”

“When we announced the heightened restrictions we made clear that we would remove them as soon as we could, and that is the decision the Ministers have taken today.”

“I know this will be welcome news for students, tourists, businesses and families in the UK and Nigeria, although I recognise the impact that these temporary health measures have had,” Laing said.”

UK’s Health and Social Care Secretary Sajid Javid said that the red list bought British scientists time to learn more about Omicron and to slow the seeding of the variant from abroad into the UK.

Javid said that now that there are high levels of community transmission, it is right to remove the red list and focus on our national effort to tackle Omicron.

“With cases doubling every two to three days we have turbocharged our booster programme, we are asking arrivals to keep testing to limit the spread of new cases, and we are introducing Plan B measures to protect the country from the threat of this new variant.”

The UK government however stated that while all countries have now been removed from the red list, the managed quarantine hotel policy remains in place to act as a crucial line of defence against the importation of variants of concern.

It stated that restrictions will be re-imposed should there be a need to do so to protect public health.

It also stated that Airlines will continue to check all passengers for pre-departure tests alongside their completed Passenger Locator Form, and passengers will not be allowed to board a flight without providing evidence of a negative test result.

“The government will take further action if necessary to contain the virus and the new variant, as has been the case throughout the pandemic.”

“The UKHSA continues to monitor the situation closely, in partnership with scientific and public health organisations across the world.”

“And the government is working collaboratively with the World Health Organisation and countries around the world to better understand the new variant.”

COVID-19 testing in Ghana not aimed at embarrassing Nigerians – Envoy