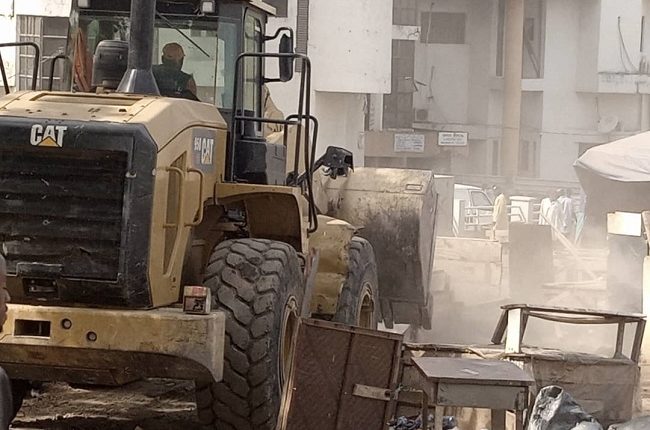 Mr Ikharo Attah, the Senior Special Assistant on Monitoring, Inspection and Enforcement to the FCT Minister, Malam Muhammad Bello, who led the exercise, vowed to rid the city of all manner of environmental nuisances.

“This is the heart of the city and must not be turned into a den of criminals, scavengers, and prostitutes.”

“In the heart of the city, where you have scavengers, criminals, brothels, and shanties, there are bound to be drug peddlers who sell drugs to them.”

“When you get there, you see ladies’ identification cards whose bags were stolen, even those of policemen.”

“If we remove this place, they won’t have a place to peddle drugs again or use it as a criminal hideout.”

“We will keep coming, cleaning, and eventually they will have to leave the city,” he said.

Attah explained that the exercise was part of collaborative effort with relevant agencies and the department in FCTA.

According to him, the Coordinator of Abuja Metropolitan Management Council, Umar Shauib, got a petition from the neighborhood and minute to his office.

“We galvanised relevant agencies together as a team and came here to clear it. We have cleared it before but sadly, many of them were rebuilt within one or two months.”

“We felt so bad that we cannot see the scavengers in their large numbers returning very quickly, the illegal shops, shanties and brothels all returned.

“In spite of FCT minister’s commitment and conviction to keep Abuja clean, many people believe that the holiday season is when the administration will not be doing much work.”

”So, they are using it to quickly rebuild to make brisk business. If we do not work towards the end of the year, we will be using a lot of resources to work in January, 2022.”

Also Mr Kaka Bello, the Assistant Director, Monitoring and Enforcement, Abuja Environmental Protection Board (AEPB) said the exercise was to remove all forms of environmental nuisances around the proposed rail corridor.

“There are a lot of scavengers who have colonised this place and we felt that such things should not exist at the city centre.”

“Our daily routine is to ensure that such environmental nuisances are abated.”

He, however, lamented that the administration had demolished the shanties for more than five times and they keep returning.

“But today we are here with the Department of Parks and Recreation to ensure that sustainable policies are put in place to ensure that these people will not return,” he said.