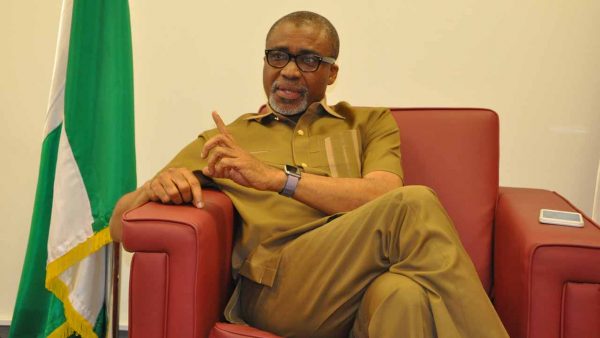 Abaribe made his interest known at a civic reception organised in his honour by Nzuko Ahiaba La Abayi, a sociocultural organisation in Ahiaba in Obingwa Local Government Area of the state.

He expressed his readiness to serve and to deliver more dividends of democracy to the people.

“As an Igbo man I respect constituted authority. I believe the number one citizen of the state should know and I have paid him that respect.

Abaribe said that it was time for people of Abia to make choices that would facilitate enhanced socioeconomic development in the state.

He expressed gratitude to God for divine guidance and thanked his constituents for organising a civic reception in his honour.

“This is the first time a civic reception is being organised for me.

“This occasion is significant because it is coming from my ancestral home and shows that they are saying that they are proud of my antecedents, achievements and that I deserve a title,” he said.

In his remarks at the occasion, Sen. Adolphus Nwagbara, Chairman of the reception, described Abaribe as one that had the interest of his constituents at heart.

Nwagbara urged the senate minority leader to continually give quality representation on issues that would transform the lives of his constituents and Nigerians at large.

Earlier, Mr Stanley Nwahiwe, a representative of Nzuko Ahiaba La Abayi, commended Abaribe for his contributions to the development of the area, adding that the reward for hard work was more work.

“Sincerely we feel highly delighted and honoured by your actions and style of governance as a vibrant senator,” Nwahiwe said.

It was reported that the senate minority leader was conferred with the title of “Maduforo Ndi Ngwa” (A man of the people in Ngwa land) at the reception.

Only truth can save PDP in C’ River, says Gershom Bassey