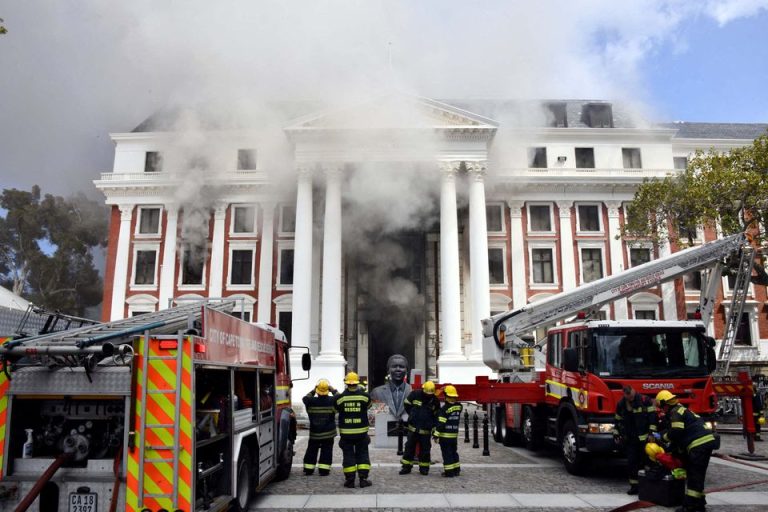 South African Police on Monday charged a man with arson over a fire that caused extensive damage to the national parliament building in Cape Town.

This is as firefighters struggled to extinguish the last remains of the blaze.

The fire broke out early on Sunday at the parliamentary complex, some of which dates back to 1884 and includes the National Assembly, or Lower House of Parliament.

It caused the collapse of the roof of a part of the complex housing the upper chamber, or National Council of Provinces (NCOP), on Sunday and gutted an entire floor, though there were no reports of anybody being hurt in the incident.

A 49-year-old suspect arrested in connection with the blaze is expected to appear in court on Tuesday.

The suspect will face charges of housebreaking and theft as well as arson, an elite police unit known as the ‘Hawks’ said in a statement.

“It is alleged that he gained entrance through the window in one of the offices,” Hawks spokesperson, Nomthandazo Mbambo, told eNCA television.

Mbambo added that investigations were continuing into how the suspect managed to evade security at the parliament.

“There is a possibility of other charges being added as there was a security breach here,” Mbambo said.

Jean-Pierre Smith, a Cape Town mayoral committee member responsible for safety and security, said firefighters were still dealing on Monday with “hotspots on the 4th floor of the National Assembly which is still smouldering’’.

“Lots of books and bookshelves (are) smouldering,” he said, adding that the interior of the National Assembly had been extensively destroyed by fire, water, heat and smoke.

The National Assembly is situated in what is known as the New Wing, which suffered the worst damage in the blaze.

The fire was more quickly contained on Sunday in the Old Wing, parliamentary authorities said.

6 die in al-Shabab attack in Kenya