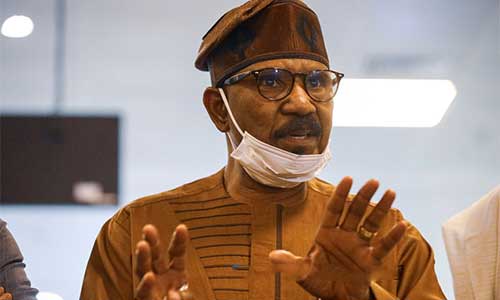 The Minister of State for Health, Dr Adeleke Mamora, says the Federal Government will continue to strengthen health regulatory agencies to actualise its various mandates in the interest of citizens.

Mamora said this at the unveiling of Medical Laboratory Science Council of Nigeria (MLSCN) accreditation service as an associate member of the International Laboratory Cooperation (ILAC) on Tuesday, in Abuja.

He said that government would also support health facilities in the country to upscale their service delivery to ensure that patients received the best possible care.

“We know that the outcome of any disease process is early diagnosis and prompt treatment.

“The accreditation will go a long way to ensure that diagnosis are properly carried out for a good result,’’ Mamora said.

According to him, the country is able to manage the number of cancers detected very early.

He commended the council for assuring they were accredited by the world regulatory agency.

He advised the council to work harder because in due time the accreditation would be reviewed.

The minister further said that the accreditation would enhance Federal Government’s effort to reposition the health sector.

He noted that nine laboratory had been accredited and urged the Federal Teaching Hospitals, Federal Medical Centres and Specialist Hospitals to key into the council’s application programmes to change the current narratives.

He said that lessons leant from COVID-19 pandemic had compelled the country to strengthen its health system to withstand future shock.

Erhabor said that the council was the statutory agency of government charged with the responsibility of regulating medical laboratory services and practice as enshrined in Act 11 of 2003 (CAP M25 LFN 2004).

“In line with meeting international best practices, Nigeria has adopted the ISO 15189:2012 as a national industrial standard for accreditation of public and private medical laboratories.

“The council has also developed a number of regulatory guidelines and a protocol for inspection of medical laboratories to support and strengthen its accreditation programme.

“In line with meeting international best practices, MLSCN became an affiliate member of cooperation on Nov. 2, 2014 and now is upgraded to associate member,’’ he said.

The registrar said that the associate membership status of ILAC confered on the council the privileges of operation of an international accreditation schemes for medical laboratory testing.

According to him, other privileges are eligibility to use the ILAC Logo or Tagline which is a registered trade mark and voting power at the ILAC General Assembly.

He added that the council accreditation services had so far granted approval of ISO 15189:2012 to 12 deserving medical laboratories with so many other baseline assessments and advocacy carried out.

Also, Dr Chukwuma Anyaike, National Coordinator, National Tuberculosis, Leprosy and Buruli Ulcer-Control Programme, said that children were now being diagnosed of tuberculosis and that such needed to be addressed.

Anyaike said that government needed to look into the case because few months back, he found a child of just three months with tuberculosis.

COVID-19: Current vaccines may need to be updated, WHO warns