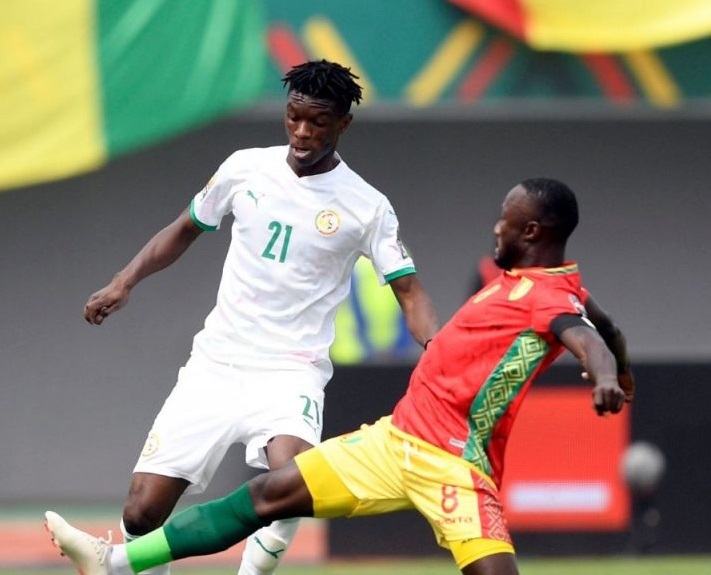 The most-anticipated top-of-the-table clash in Group B of the 2021 Africa Cup of Nations (AFCON) in Cameroon, involving West African giants Senegal and Guinea, ended in a goalless draw on Friday.

Liverpool teammates Sadio Mane and Naby Keita were playing on opposite ends and both players were captaining their respective teams in the game at the Stade Omnisports de Bafoussam.

They looked to send their respective country into the Round of 16 having won their opening group matches with similar 1-0 scorelines.

Guinea came out of the blocks early with Ilaix Moriba having the first attempt of the game from a set-piece but the effort was way off target.

Senegal responded quickly with Bouna Sarr seeing his shot blocked from outside the penalty area.

Seny Dieng, the Senegal goalkeeper, denied Guinea what should have been the opening goal of the match.

Morgan Guilavogui saw his right-footed shot from the six-yard box saved by Dieng at point-blank range after good square pass by Ilaix Moriba.

The first half ended goalless with the Syli Nationale of Guinea edging the possession.

The second half started with Senegal looking the stronger of the two and doing more attacking.

First it was Cheikhou Kouyaté attempting a header from a set-piece by Bouna Sarr.

Then just moments later Abdou Diallo’s header which was destined for the top left corner was saved by Guinea goalkeeper Aly Keita.

The Teranga Lions kept pushing Guinea to the limit with persistent pressure.

Bouna Sarr nearly broke the deadlock after being fed by skipper Sadio Mane, but his effort went agonisingly wide of the left post.

Guinea’s coach Kaba Diawara looked to soak the pressure from the Senegalese team by switching things up, with Ibrahima Sory Conté coming in for Ilaix Moriba in midfield.

In the end, both teams could not find an opening and will have to wait for their final matches on Tuesday to qualify for the Round of 16.

Speaking after the match, Diawara said: “We came to carry the three points but we are contented with the single point as Senegal came back to the second half looking very strong and determined.

“It was a tough match, but I am happy the reconstruction I have been doing to the team paid off, considering we played a very formidable side respected in Africa.

“We created dangerous situations and our efficiency was very commendable. Now we (will) go back and prepare for the last game in the group”.

On his part, Senegal’s Aliou Cisse said: “I am satisfied with the draw today (Friday) against Guinea as we came back stronger in the second half unlike the first half where we were not perfect.

“Guinea played a perfect game and we have to commend them. But now we go back and work to ensure we get three points from our next opponents Malawi.

“The competition has good teams and, even though many people expect us to win all games, our ambitions remain the same and we want to build from the draw “.

It was reported that Senegal will remain in Bafoussam where they will face the flames of Malawi.

Guinea will join Zimbabwe in traveling to Yaounde, with their tie set for the Ahmadou Ahijo Stadium.