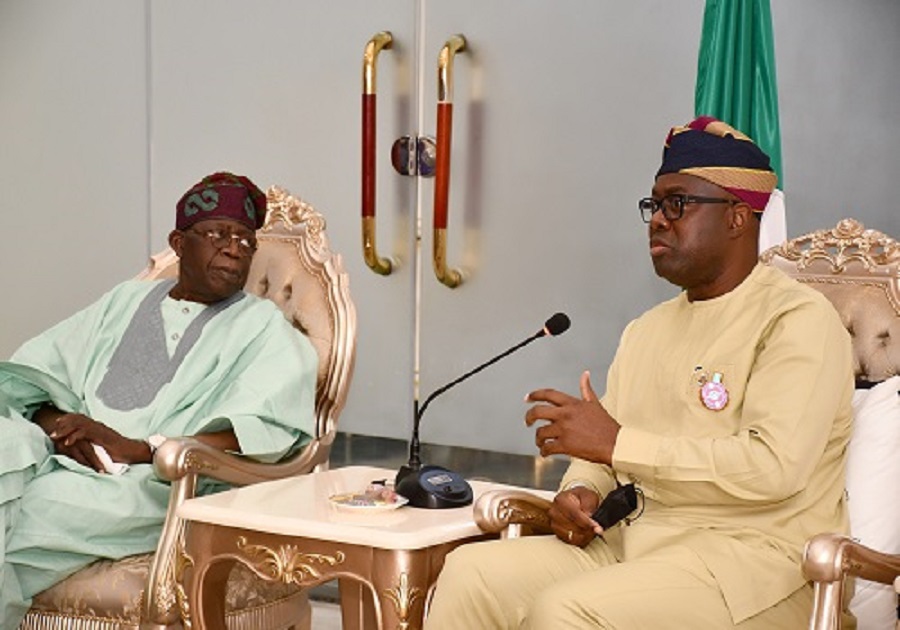 The National leader of the All Progressive Party (APC), Bola Tinubu, on Saturday, paid a condolence visit to Gov. Seyi Makinde of Oyo State, on the recent deaths of two prominent traditional rulers and a former Governor of Oyo State, Chief Adebayo Alao-Akala.

The former Governor of Lagos State and some of his political associates visited Makinde at the State Government House, Agodi in Ibadan.

Makinde, while appreciating Tinubu for the visit, said that his action had proved that he stood for politics without bitterness.

According to him, this is the year political parties will elect their candidates toward the 2023 elections, but you visited here in spite of our political differences.

“During this political season, you may have to question yourself on why you need to come to the Oyo State Government House because people might have different interpretations to it.

“But, you sent a message across to me and I was delighted to host you in Ibadan.

“We really thank you for this visit and we have taken proper notice that you have risen above politics.

“And for your going around to come and share with us at this moment that we are grieving, we say thank you,” Makinde said.

He, however, wished Tinubu well in his political quest to govern Nigeria.

According to him, we want the best for this country and only the best is good enough at this particular time.

Earlier, Tinubu said the purpose of his visit was to condole with Makinde, his government and the entire people of Oyo State over the demise of the former Governor, Adebayo Alao-Akala and two traditional rulers- Soun of Ogbomosoland, Oba Jimoh Oyewumi Ajagungbade and the Olubadan of Ibadan, Oba Saliu Adetunji.

He said the departed traditional rulers and Chief Alao-Akala, would be greatly missed because of their contributions to the development of the state.

The former Lagos State Governor said that the reigns of the two prominent traditional rulers in Ogbomoso and Ibadan were peaceful, adding that they had contributed immensely to the peaceful atmosphere in the state.

He said that Alao-Akala equally contributed immensely to the political development and the love radiating within the political arena in the state.

Tinubu also commended Makinde for receiving him in spite of the short notice given for the visit, saying that the governor had demonstrated “good character”, which he said was rare.

“People get, sometimes, intoxicated with power and the arrogance of office can be overwhelming, but not with you; thanks for receiving us so quickly.

“With the demise of these three figures in Oyo State, we share in your loss.

“You, as the governor on the saddle of power, take responsibility for the situation here.

“I want to say we thank God that Ibadan had been peaceful and not ‘a den of violence’, but peaceful.

“Every other thing that has happened has taught us in the book of religion that we are just passing through and we will leave one day.

“But, no matter how long, it is difficult to absorb the loss easily,” Tinubu said.

The Oyo APC Governorship candidate in the 2019 election, Chief Bayo Adelabu; Sen. Soji Akanbi and James Faleke, were among those on the entourage of the APC national leader.