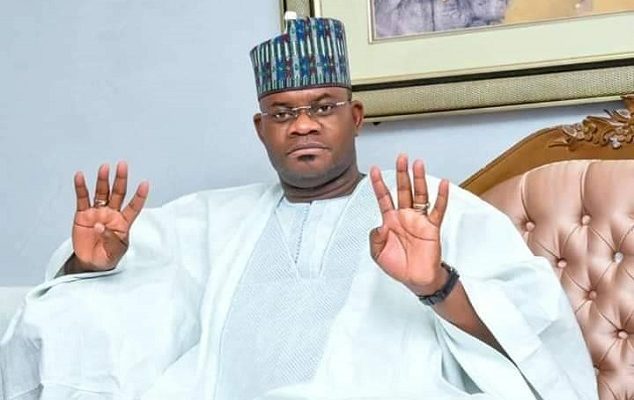 Women across Nigeria, under the aegis, National Coalition for Women Support Group have endorsed governor Yahaya Bello of Kogi as their presidential candidate for the 2023 polls.

The Women made the endorsement when they paid him a visit at the Kogi Governor’s Lodge in Abuja, stating that they have endorsed Bello based on his excellent performance in Kogi.

Mr Onogwu Muhammed, Chief Press Secretary to governor Bello disclosed this in a statement on Friday in Abuja.

Hon. Mariam Yunusa, Leader of the group and National Women Leader, APC support groups, lauded Bello for all he has done well in Kogi.

Yunusa stated that Bello has done excellently especially in the areas of security, women and youths inclusiveness in governance, infrastructure and human capital development.

She stated that the group is aware of what Kogi State used to be in terms of security before the governor took over in 2016 and how the situation has changed for the better now.

“Governor Bello has been able to tackle insecurity in Kogi making the state one of the safest in the country today.

“If given the opportunity, Governor Bello will Bring the needed peace to the country because he has been so merciless to the criminal elements in Kogi State,” Yunusa stated.

Worried about the neglect of women in governance, Yunusa noted that Bello has surpassed the 35% affirmative action considering the number of women in his government.

“Gov. Bello has surpassed the United Nation’s 35% affirmative action, starting from the Secretary to the Government, Head of Service of the State.

“Vice Chancellor of the state university, female vice chairpersons of the 21 local government areas of the state, heads of agencies and parastatals and so on,” she stated.

Yunusa stated that the two evil confronting Nigeria as a country today were insecurity and disunity, noting that governor Bello has demonstrated political will, leadership quality and capacity to deal with all the menace.

She also stated that Bello’s performance has made him the better choice for Nigerians than any other candidates.

Yinusa stated that the visit is therefore, a call from Nigerian women for Bello to run for presidency in 2023 haven found him as the only person who can bring the much needed peace, security and unity of the country.

In his response, Bello thanked the group for their support and love for Nigeria.

Bello assured the group that he was not going to disappoint them, stating that it will not exceed the month of March before he would answer the call of the people.

He commended the leadership of governor Mai Mala Buni of Yobe, Caretaker Extraordinary Convention Planning Committee Chairman of the APC for expanding the party in strength and number.

Governor Bello said he will declare his intention to run under the APC after the party’s National convention.

According to the statement, ahead of the 2023 presidential election, governor Bello has continued to receive more endorsements from different groups and associations in the country.