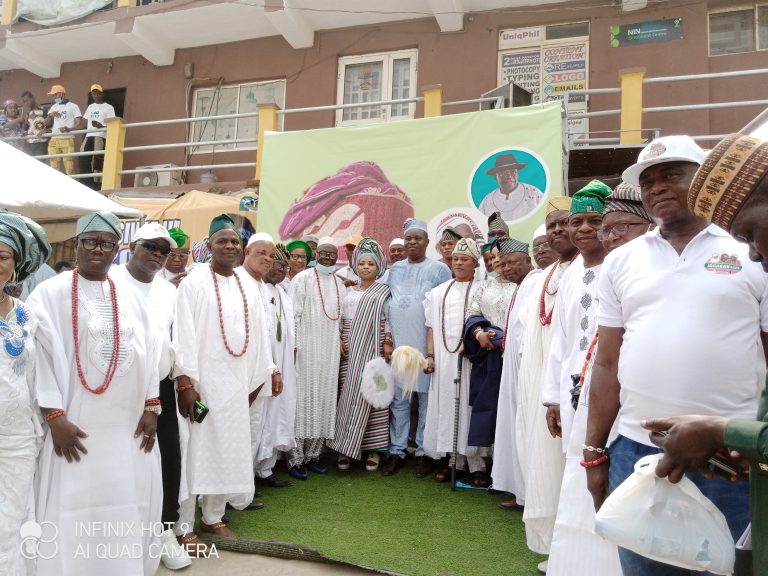 The Speaker of the Lagos State House of Assembly, Mr Mudashiru Obasa has unveiled a billboard and vehicles, donated by the Olu of Iwaya, Oba Babatunde Ajaga in support of Sen. Bola Tinubu’s 2023 presidential ambition.

Our correspondent reports that the billboard and vehicles donated by Ajaga, the Oba-elect of Iwaya community, was unveiled by the speaker at the Third Mainland Interchange, Adekunle area of Lagos on Friday

Ajaga said the donation was an endorsement of Tinubu as the most suitable to lead the nation come 2023.

“As a private businessman for 35 years in real estate, I have checked round, no one is better qualified to lead Nigeria in 2023 than Tinubu.”

The Oba said that his royal family and council of chiefs were behind Tinubu’s aspirations to run for the office of president in the 2023 general elections.

“Tinubu is a great man that no one can forget in West Africa. He has done a lot across the country and beyond, for the masses.”

“The gentleman is a good man and I can assure you that Nigerians won’t regret if he emerges as president.”

“I feel so good and happy to contribute to the success of his upcoming campaign because of what he has done all over the nation.”

“I am not a politician, I am a business man to the core, but looking round, Tinubu is the solution.”

“Based on his performance, he is 100 per cent fit to lead. We believe in him and nobody can change our mind,” Ajaga said.

According to him, Tinubu’s record as a former governor of Lagos state, shows that he is a compassionate father with high ingenuity to make things work in all areas.

“I advise all to work for Tinubu and no one will regret, considering his antecedents,” the Oba-elect said.

Ajaga, urged the Yoruba race to support Tinubu’s aspirations to move forward, and expressed hope that the former Lagos governor would take the country to higher heights.

Earlier, Obasa, while unveiling the billboard and vehicles, urged Nigerians to support Tinubu and ensure that his ambition came to fruition.

The speaker said that Tinubu had done a lot for the nation, raised so many leaders and had helped so many achieve their political ambitions.

Also speaking, Oba Abdulfatai Aromire, the Ojora of Ijoraland, expressed confidence that all the royal fathers in Lagos and Nigeria would support Tinubu’s ambition to move the nation forward.

Aromire expressed hope that Tinubu would emerge as candidate and ultimately be successful at the polls.

Our correspondent reports that the event had in attendance, traditional rulers, members of the South West Agenda for Asiwaju 2023 (SWAGA) among other notable politicians.