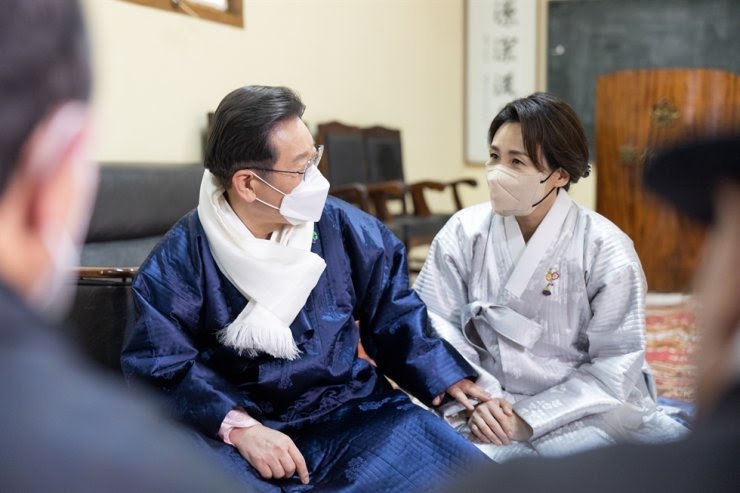 The wife of ruling party presidential candidate Lee Jae-myung was on Thursday under fire over allegations of using her husband’s aides to run her errands.

The errands includes picking up packs of beef, getting drug prescriptions and leaving them at her door step.

Kim Hye-kyung, the wife of the Democratic Party (DP) presidential nominee, had earlier on Wednesday issued an apology, five days after SBS TV first reported the claims, saying she took full responsibility for what transpired as she should have drawn a line between personal and official business.

The revelation came only weeks ahead of the March 9 presidential election, a tight race in which her husband has been neck and neck with main opposition candidate Yoon Suk-yeol of the People Power Party (PPP) in recent polls.

Kim faced further criticism after KBS TV reported that an aide, who worked as a secretary for the Gyeonggi provincial government when Lee was the governor, was made to pay for Kim’s purchase of beef using a personal credit card, only to cancel the transaction a day later and repeat the transaction with a company credit card.

The media reports have largely been based on text messages and phone calls exchanged between the aide and a higher-level official in an administrative department from April to November last year.

The higher-level official, surnamed Bae, has been identified as the person who gave the orders.

Lee also issued his own apology under mounting pressure.

According to one report, the secretary had collected Lee’s suit from the official governor’s residence and discussed handling his laundry even after he had left office in October.

“As governor, I failed to thoroughly check for possible wrongful acts by my staff, and my wife failed to detect and stop in advance things that could be problematic,” he said in a statement, calling for an inquiry into the use of the company card.

“If any problems are revealed, I will take responsibility in accordance with the rules,” he said, adding that he and his family, and those around him, promise to think and act more prudently from now on.

The PPP has seized on the accusations after grappling for months with a similar controversy related to the alleged ethical lapses of Yoon’s wife, Kim Keon-hee.

The party said it plans to report Lee, his wife and the public servant to the prosecution on charges of abuse of power, extortion and violation of the medical law.

Bae had earlier admitted that she sent the secretary on errands, not at Kim’s orders but out of her own desire to curry favor with the governor couple.

Initially, she had denied her involvement and threatened to take action against those who spread false rumors.

The DP has come to Lee’s defence, saying neither the candidate nor his wife was directly involved in the case.

“We have to determine the facts and the truth behind what transpired between (the two staff members),” Rep. Park Chan-dae, senior spokesman of the DP campaign committee, said in a CBS radio interview on Thursday.

ECOWAS: No excuse for change of government by coup d’etat – Osinbajo

UNEP, WHO to launch campaign to combat microplastics in cigarettes