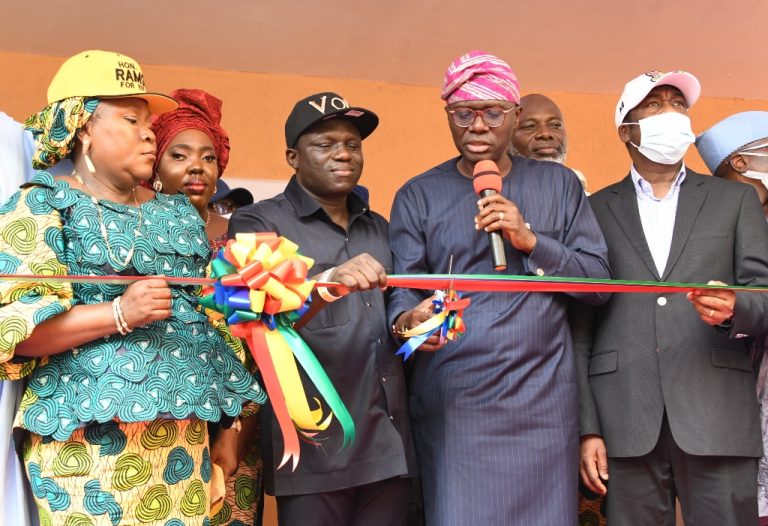 The News Agency of Nigeria (NAN) reports that the health centre was named after a former First Lady of Lagos and lawmaker representing Lagos Central District in the Senate, Sen. Oluremi Tinubu.

This is in recognition of her exemplary passionate contributions to child development and her several child-oriented programmes and initiatives during her time as Lagos State First lady.

The two-storey healthcare facility, built by Amuwo-Odofin Local Government Chairman, Mr Valentine Buraimoh, was initiated to shore up healthcare delivery to residents and those in the neighbouring Oriade Local Council Development Area (LCDA).

Speaking during the inauguration, Sanwo-Olu said that his administration was committed to delivering more dividends of democracy, by ensuring more investment in critical infrastructure projects that would benefit Amuwo-Odofin residents.

He said that the completion of the health centre was a commendable achievement that perfectly aligned with the administration’s T.H.E.M.E.S Agenda, to prioritise provision of quality healthcare for the residents.

”The modern healthcare facility is what our vision for infrastructural renewal of our state looks like.

”With high-impact projects that cut across many communities and improves quality of life and the ability to earn a legitimate living, Amuwo-Odofin’s landscape is changing for good,” Sanwo-Olu said.

Buraimoh said that Gov. Sanwo-Olu was the first governor to pay a working visit to the area and inaugurate council projects.

The council boss said the new healthcare centre was built to bolster quality care, given the inadequacy of the existing facility to cope with overwhelming demands.

Braimoh said that although the project was conceived as a Primary Health Centre, the design and capacity of the facility were upgraded to provide a semi-secondary healthcare services.

”The PHC is named after Senator Oluremi Tinubu in recognition of her contribution to child health development in Lagos and several health-focused initiatives she is championing,” he said.

Tinubu most suitable to lead Nigeria in 2023- Group