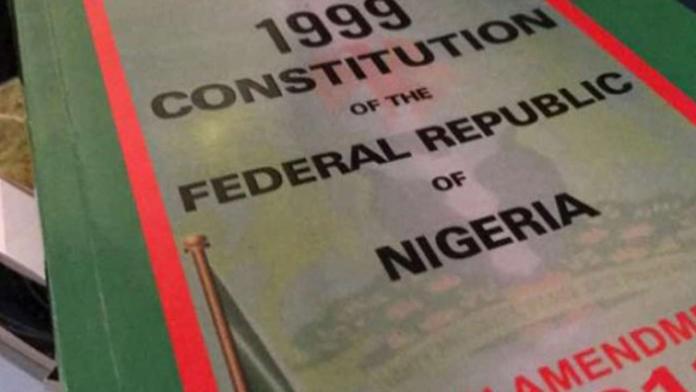 Conference of Speakers of State Legislatures in Nigeria has insisted on the restructuring of Nigeria and community policing in the on-going amendment to the 1999 Constitution.

Chairman of the Conference and Speaker, Bauchi State House of Assembly, Abubakar Suleiman, stated this in Abuja on Friday.

He was addressing at a retreat of the Joint Senate and House of Representatives Ad-hoc Committees on the Review of the 1999 Constitution with Speakers of States Assemblies.

Suleiman said that with the challenges of insecurity, it was important for the legislature to address many agitating issues such as restructuring, devolution of powers, community and state police.

“We are confronted with certain challenges in the country that border on insecurity, economy, devolution of powers and weak institutions.”

“The Conference of Speakers subscribes to the call that the review of Constitution is one of the legislative actions at our disposal that could be explored to address these challenges.”

“We call on the National and States Houses of Assembly to seize this opportunity of another amendment to address agitating issues such as restructuring, devolution of powers, community and state police,” he said.

While appreciating the inclusiveness in the exercise, the chairman called on the National Assembly to endeavour to carry along other major stakeholders like the Presidency and governors in the exercise.

“We are particular about the executive arm at both tiers of government because of previous experience and reluctance or selective considerations for presidential assent and challenges of implementation at the state level,” Suleiman added.

In his remarks, Deputy Senate President, Ovie Omo-Agege, said the retreat provided an auspicious opportunity to interface with state legislatures as distinct and critical partners in Constitutional amendment.

“Surely, and without a doubt, the success of this process largely depends on your support and partnership.”

“Going forward, after passage of the proposals by the National Assembly in a fortnight, you will be the pillar on which this work will be anchored,” he said.

Omo-Agege explained that the proposed amendments set out institutional and legal reforms, which together with sufficient political will, would help to strengthen institutions of governance and provide for accountability and transparency.

“Of the 62 bills, eight bills were rejected, 25 bills were retained with modifications and the consideration of three bills was deferred.”

“One thing we are sure of is that no one has been left behind.”

“We have aggregated all manners of proposals, sorted them out to meet Constitutional guidelines and criteria and have ultimately harmonised positions on several critical issues,” he stressed.