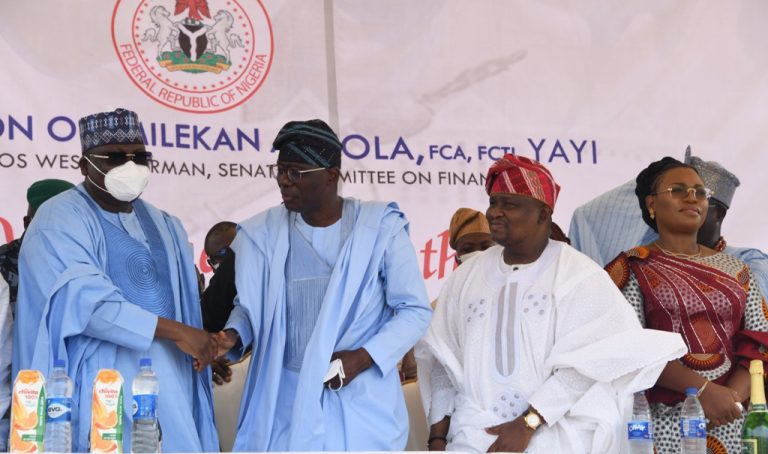 The Senate President, Ahmed Lawan, has stated that Gov. Babajide Sanwo-Olu of Lagos State deserved a second term, for the good work he had done in the state.

Lawan said this in Ikeja, at the 5th Town Hall Meeting and Empowerment Programme organised by the lawmaker representing Lagos West in the Senate, Sen. Solomon Adeola, popularly known as Yayi.

He commended Sanwo-Olu for delivering the dividends of good governance to the people of Lagos state, hence, validating the state’s position as the economic and commercial nerve centre of the country.

The Senate President said that the All Progressives Congress (APC) leadership across the country had watched with satisfaction the giant strides made by Sanwo-Olu, stating that without any equivocation, that the governor deserved re-election.

”We have been watching you over the past two and half years. You have been very wonderful. You have been consistent in terms of service delivery to the people of Lagos and indeed this country. You were focused,” he said.

According to him, the tremendous achievements the state recorded within a short period under the Gov. Sanwo-Olu’s watch needed to progress.

The Senate President commended Sen. Adeola for his contributions to the robustness of the Senate and his efforts to uplift his constituents, through regular empowerment.

Lawan called for more support for the APC, assuring that the ruling party was up to the task of defeating the opposition again.

On his part, Gov. Sanwo-Olu lauded Adeola’s empowerment programme, noting that some of the items, such as the ambulances and hospital equipment, would go beyond party affiliations, when they become operational.

He described Adeola’s efforts as complementing those of President Muhammadu Buhari and of the state government.

Sanwo-Olu said that his administration was committed to further develop Lagos State in all ramifications, promising that he would continue to carry out human-friendly projects that would have positive impacts on residents and by extension, Nigeria.