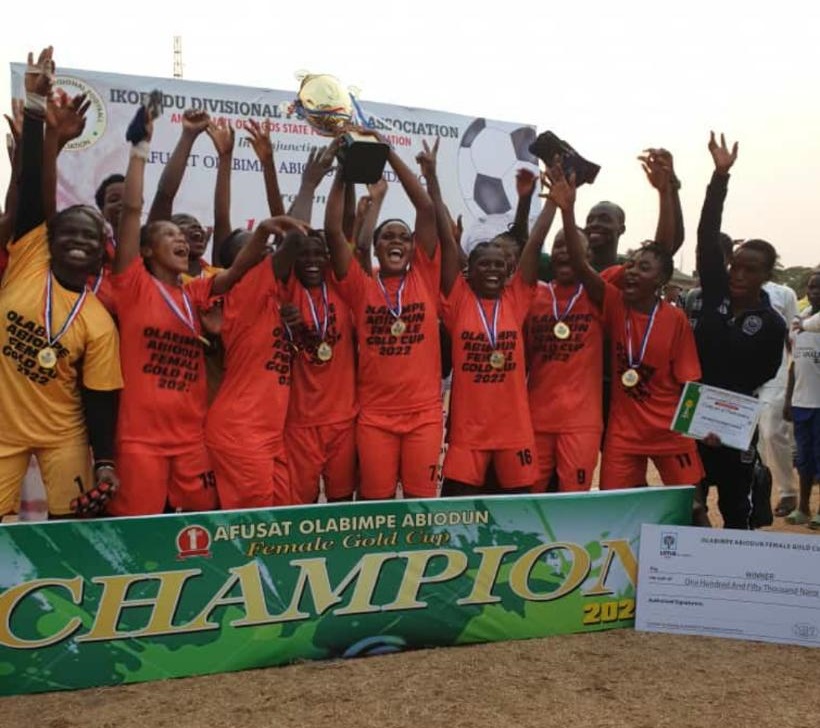 Stakeholders have called for investment in women’s football as a viable means of empowering the girl-child through sports participation.

The call was made at the maiden edition of the Afusat Olabimpe Abiodun Female Gold Cup in Ikorodu, Lagos.

The tournament which began on Jan. 23 drew female teams from all parts of Lagos state in a battle for the title.

The fierce encounter was decided on penalties after both sides battled to 1 – 1 draw at full time. The penalty shoot out led to the emergence of Kazeem Eletu Queens as champions of the tournament.

Speaking at the closing ceremony, Director-General, Lagos State Sports Commission, Oluwatoyin Bolowotan, said that the tournament was organised to promote the development of the girl-child.

“It is a good thing happening here in Ikorodu; this is what we have been longing for, we will encourage more people to come to the assistance of the girl-child.

“I think it is high time we start doing things like this to encourage our girl-child to participate in sporting events like this.

“Other activities that can engage them and give them hope both physically, mentally and healthwise should also be introduced into our society.

“I commend the organiser and sponsor because we need more of such events in our society so that we can have a better society in which all of us will be proud of,” he said.

Adeoye Abiodun, the Sponsor and Vice Chairman of Ikorodu Division of the Lagos State Football Association, expressed the optimism that the competition had exposed talented female players.

He added that the competition would soon be upgraded to seasonal level to ensure that more talented players are discovered.

“This is the first Afusat Abiodun Competition in memory of our late mother, who died 39 years ago. We will be doing this yearly.

“The competition is an opportunity for the girls to help them showcase their talents, to also have some of the girls play for the National team and also the U-17 team.

“Hopefully some of them can also play in Europe and also we hope we can get more of Osuolale Azizat among them,” he said.

The most valuable player of the competition, Kemi Osundina, got N20,000.00 and a four years University Scholarship from the foundation.

Liverpool hit Leeds for 6 to close gap on City