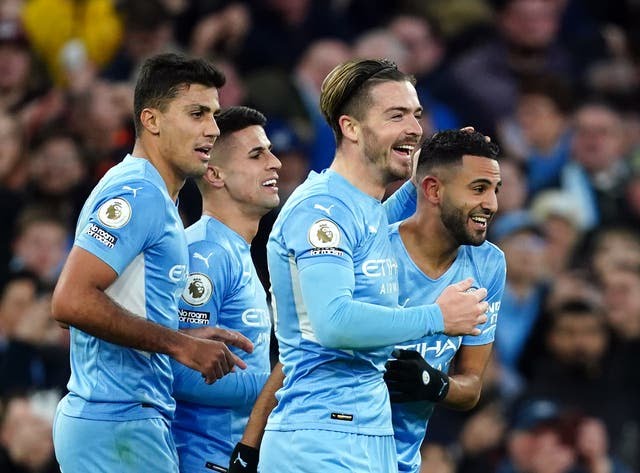 Manchester United had won their previous three games at the Etihad Stadium in all competitions.

But, without the injured Cristiano Ronaldo, they were behind inside five minutes to a close-range De Bruyne strike.

After Jadon Sancho temporarily levelled up against his former club, De Bruyne struck a second to put Manchester City back in front before half-time.

The Belgian then teed up Mahrez for a superb Manchester City third in the second half.

Manchester United were previously unbeaten in 11 games in normal time in all competitions but conceded a fourth when Mahrez doubled his tally late on.

It helped to see Manchester City give themselves some breathing space at the top, albeit with Liverpool holding a game in hand.

The Reds still have to travel to the Etihad next month.

De Bruyne was left in plenty of space to drill Bernardo Silva’s low pass away from David de Gea early on.

The Belgium international was registering his 50th goal in the competition.

Manchester United otherwise made a positive start, in spite of also being without Raphael Varane, Luke Shaw and Edinson Cavani, and they were level with 22 minutes played.

Sancho was played into space by Paul Pogba and cut inside before sending a delightful curled finish past Ederson from the edge of the penalty box.

He blasted in after Phil Foden’s initial shot was well saved by De Gea and not dealt with by Manchester United’s defenders.

De Bruyne was again involved when picking out Mahrez from a corner-kick to volley in a third goal for Manchester City.

The Algeria international rounded off the scoring in the 90th minute with another crisp finish after VAR judged Alex Telles had played him onside.