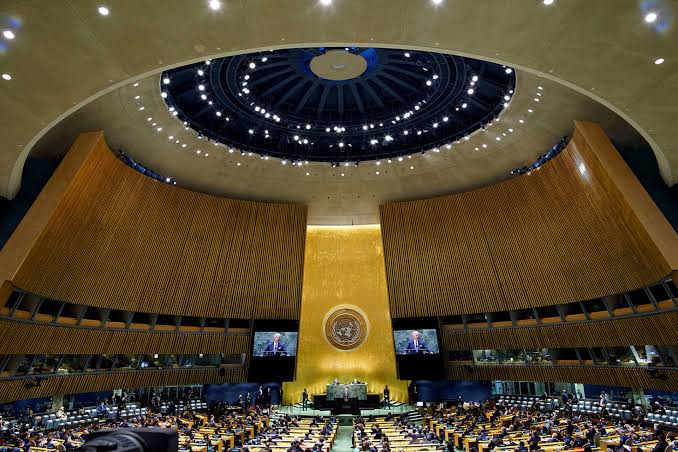 The UN General Assembly has voted to suspend Russia from the Human Rights Council in response to Russian forces’ alleged killings of civilians in Ukraine.

The resolution received a two-thirds majority in the 193-member Assembly, with 93 nations voting in favour and 24 against. Fifty-eight abstained from the process.

Our UN correspondent reports that Nigeria is among the 58 countries that abstained from voting.

Thursday’s historical vote on the floor of the UN makes Russia the first permanent member of the UN Security Council to have its membership revoked from any UN body.

The meeting marked the resumption of a special emergency session on the war in Ukraine and followed reports of violations committed by Russian forces.

This past weekend, disturbing photos emerged from the city of Bucha, a suburb of the capital, Kyiv.

In Bucha hundreds of civilian bodies were found on the streets and in mass graves following Russia’s withdrawal from the area.

Prior to the vote, Ukrainian Ambassador to the UN, Sergiy Kyslytsya, urged countries to support the resolution.

“Bucha and dozens of other Ukrainian cities and villages, where thousands of peaceful residents have been killed, tortured, raped, abducted and robbed by the Russian Army, serve as an example.

“It serves as an example of how dramatically far the Russian Federation has gone from its initial declarations in the human rights domain.

“That is why this case is unique and today’s response is obvious and self-explanatory,” he said.

Gennady Kuzmin, Deputy Russian Ambassador, called for countries to “vote against the attempt by Western countries and their allies to destroy the existing human rights architecture.

According to the spokesperson for General Assembly President, Abdulla Shahid, the draft resolution is entitled ‘Suspension of the rights of membership of the Russian Federation in the Human Rights Council’.

It was initiated under agenda item five of the Emergency Special Session.

“It was signed by representatives of Antigua and Barbuda, Canada, Colombia, Costa Rica, Georgia, Japan, Liberia, Republic of Moldova, Ukraine and the United Kingdom.

Greer said the draft resolution was submitted for co-sponsorship by the following countries: Ukraine, Antigua and Barbuda and Canada.

Meanwhile, U.S. Ambassador to the UN Linda Thomas-Greenfield while addressing Security Council on Tuesday demanded Russia’s suspension from the Human Rights Council over that the invading troops massacred civilians in Bucha.

Thomas-Greenfield said Russia had been using its membership as a platform for its propaganda.

The Human Rights Council is a body at the UN charged with promoting and protecting human rights globally.

Based on available information, she said the U.S. has assessed that the Russian forces committed war crimes in Ukraine.

The envoy said that behind the images of bombed out buildings; many people had “stuffed their lives into backpacks” and left the only home they had ever known.

She gave her own account of the refugee crisis in parts of Europe, having returned on April 4 from the Republic of Moldova and Romania.