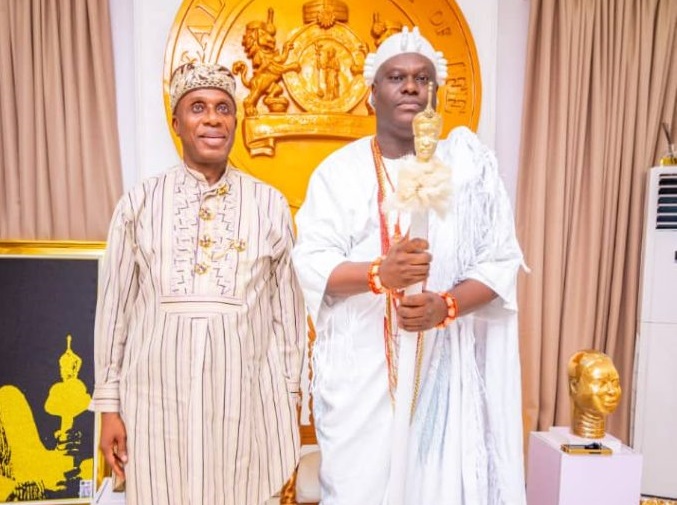 The Ooni of Ife, Oba Adeyeye Ogunwusi, has equated leadership positions to that of a steward, who is meant to serve others.

Ogunwusi stated on Monday this at his Ile Oodua Palace, Enuwa, Ile-Ife, while playing host to the Minister of Transportation, Mr Rotimi Amaechi.

The minister, who led a high-powered team to Ile-Ife, was on a courtesy visit to the Ooni as part of his presidential bid consultation.

The Ooni described the minister as one of the luckiest politicians in the country, pointing out that Nigerians had a lot to gain from his wealth of experience.

“You have been relevant since the start of this republic; it is for a reason and I urge you to use that grace for the betterment of all Nigerians.

“What is obvious in your team is the inclusion of women, I am proud of this and I want you to keep doing more in this regard.

“Women are so powerful, especially when given leadership opportunities, they see what we men do not see,” the Ooni said.

Earlier in his address, Amaechi lauded the oba for preserving and upholding the prestigious Yoruba culture.

He said that governance of the country had a lot to benefit from the traditional institution.

He said that he decided to start his consultation and visitation from Ile-Ife because “the ancient city is the Source.

“If elected as Nigeria’s president in 2023, I will sit down with the National Assembly to address the relevance of the traditional institution in Nigeria.

“There is need to consult our traditional rulers in order to bring governance closer to the people,” the presidential aspirant said.

On his presidential ambition, Amaechi, who is 56-year-old, described himself as the bridge between the young and the older generations in the country, adding that he was the most qualified.

“With due respect to my brothers in APC, PDP and other political parties, I am the most qualified in this present race.

“I am grateful to God for the opportunities given to me over the years,” he he said.

The Chairman, Senate Committee on Army, Sen. Ali Ndume, who is the chair of Amaechi campaign team, led other dignitaries to the palace.

Lalong cautions governorship aspirants to avoid use of foul language