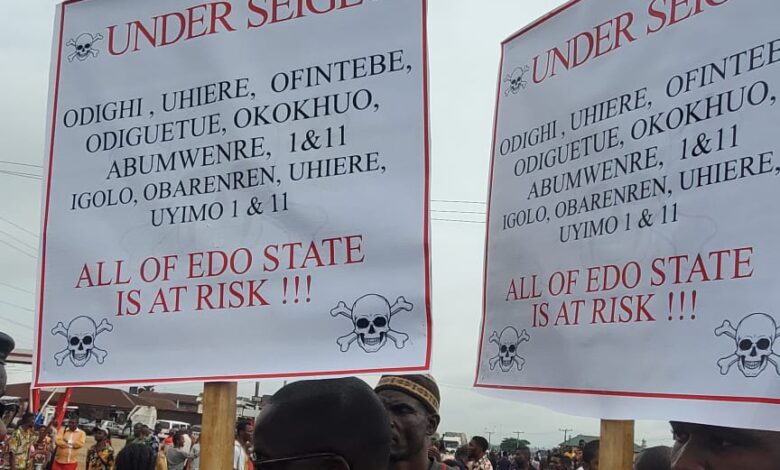 At least 15 communities in Edo, together with Civil Society Organisations (CSOs), Monday barricaded the Lagos-Benin Expressway to protest the alleged herdsmen fatal attacks in the area.

They alleged that many indigenes had been killed in the attacks.

They also claimed that many had been evicted from their ancestral homes.
The protest, which lasted several hours, led to severe gridlock on the expressway and adjoining roads.

The Spokesman of the communities, Mr Osagie Obayuwana, said they were worried by the looming crisis allegedly orchestrated by armed herdsmen.

Obayuwana urged the State Government and security agencies to take urgent measures to checkmate the activities of the herders from snowballing into full blown crisis.

He said: “We want the whole world to know the experience our people are going through for quite some time now.
“About 15 communities have been under siege for many years running.

“Farmers have been prevented from going to their farms, another planting season is going away.

“The communities have been sentenced to hunger and this has an implication for the larger society.

“So far, we have not seen any serious efforts by relevant authorities to address the issue.

“Our people have gone to different government agencies, including the legislative and executive arms, but nothing positive has coming out of our efforts.

“Right now, the matter is degenerating to the extent that people are being driven out of their villages.”

“We are worried that what is happening in Benue and Plateau States might be coming to the shores of Edo.

“We do not want the situation, where armed herdsmen drive people away from their communities, change the names of the communities and start to occupy them.

Also, Mr Osazee Edigin, the former Public Relations Officer of the state CSOs, said the level of insecurity in many communities in the state had gone from bad to worse.

“This is the reason we decided to join our voices with theirs to call on government at all levels to come to their rescue.

“We are here to support these communities that have been ravaged and sacked by herdsmen.

“We see the development as a sign of great insecurity in the state and we want the urgent intervention of the government and law enforcement agencies.

“We are here to amplify the voices of these locals so that government would intervene.

“If there is no intervention now, we are going to have acute food shortage and more people would become victims.

“We urge the government to rise to the occasion and protect lives and property.
Narrating their experience, Mr Aik-Ikhuokhuo Uwaifo from Uhiere Community, recalled that the community and the herders cohabited peacefully in the past.

He regretted that the story suddenly changed, when the herders allegedly turned violent, invade their farms, rape their women, kill the natives and evict many others from their homes.

Also, Mrs Rhoda Ogba from Odigi Community said that “cows do not eat grass anymore but yam, cassava and cocoyam in people’s farms”.

“The commissioner of police, we all know is new in the state.

“We are all on the same page with you, hence my being here to talk to you.

“The CP has asked me to remind you that he is a new person in the state.

“He has taken note of all the incidences the police have had in the various communities.

“There are very critical strategies that have been worked out to ensure that the excesses of these men, who are disturbing our villages, are monitored and checked.

“I want to assure you that the police are not resting on this issue.

“We shall work hands in gloves with the communities to realise the essence of this gathering,” he said.