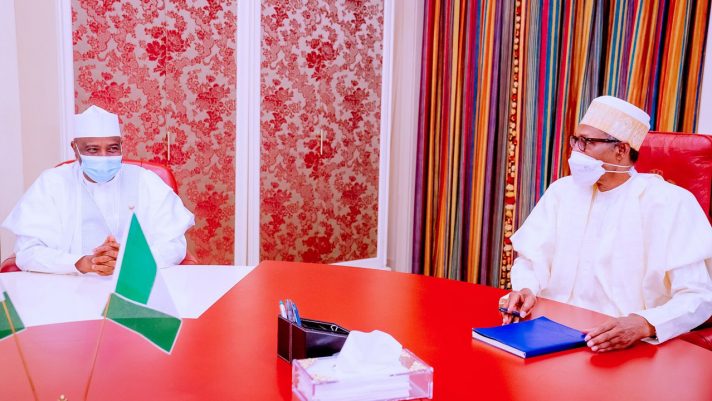 President Muhammadu Buhari on Tuesday met behind closed-doors with Gov. Aminu Tambuwal of Sokoto, at the Presidential Villa, Abuja.

Our correspondent reports that Tambuwal, who was elected on the platform of the People’s Democratic Party’s (PDP), has since indicated interest to contest for 2023 presidential election.

However, Tambuwal has rejected claims that Bukola Saraki and Gov. Bala Mohammed of Bauchi emerged as the PDP Northern consensus candidates of the party for the presidential election in 2023.

The governor, when accosted by State House correspondents, declined comment on the outcome of his meeting with the president, saying his visit to villa was private.

Our correspondent, however, reliably learnt that Tambuwal briefed President Buhari on socio-economic and security developments in his state.

It was reported that the president also met behind closed door with Gov. Atiku Bagudu of Kebbi State.

Bagudu, who is also the Chairman of the Progressive Governors’ Forum, declined comment on the outcome of his meeting with the president.