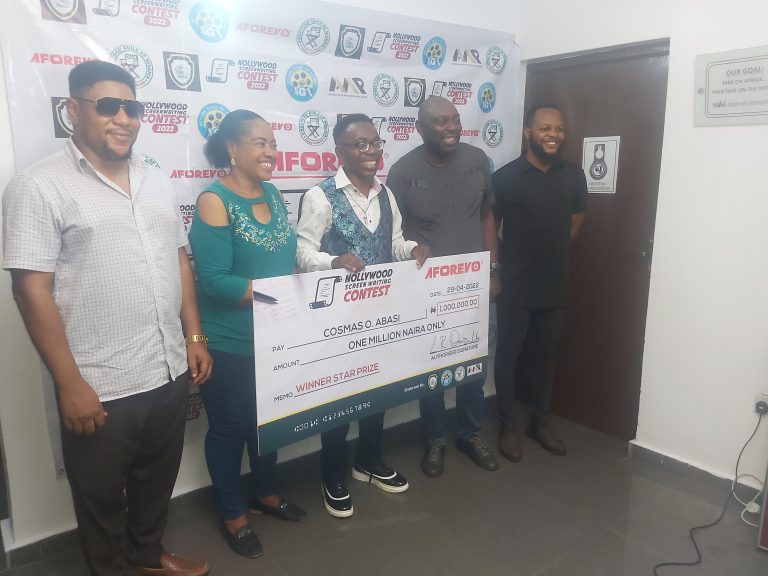 Aforevo, a filmmaking company, organisers of Nollywood screenwriting contest, on Friday rewarded the overall winner of the contest, Cosmos Abasi, with N1 million.

Mr Lawrence Onuzulike, Managing Director of Aforevo during the presentation of the reward in Lagos, said screen writers who were the bedrock of film production were not usually reckoned with in the society.

Onuzulike said the maiden edition of the contest was held to ensure the attention of the public was drawn to the remarkable work of screenwriters in Nigeria.

He said that it had become frustrating for most screenwriters in Nigeria who would rack their brains to write beautiful scripts and beg for those scripts to be bought or used free of charge.

“I have been in this industry for over 24 years as an actor, screenwriters and movie producers and I know the plight of every Nigerian screenwriter. So, the essence of this is to ensure they are reckoned with.

“It is interesting to note that we have so many creative writers in the country, this contest got over 1,000 script submissions, out of which we picked 600.
“The contest has come to stay and we are looking at holding it twice in a year to further encourage screenwriters to continue doing better,” he said.

Abasi, the overall winner of the contest, expressed his excitement as he urged movie producers to consider paying screenwriters handsomely as they contribute hugely to the success of movies released in the country.

He said it was high time government took screenwriters and individuals with intellectual properties seriously.

He advised everyone with intellectual properties to always ensure their works were registered with the Copyright Society of Nigeria to guide against those works being pirated.

“It was such a great work to have come up with the script that won me N1 million, I can remember, there were days I didn’t change my clothes but here I am, I’m excited and I will be doing more,” he said.