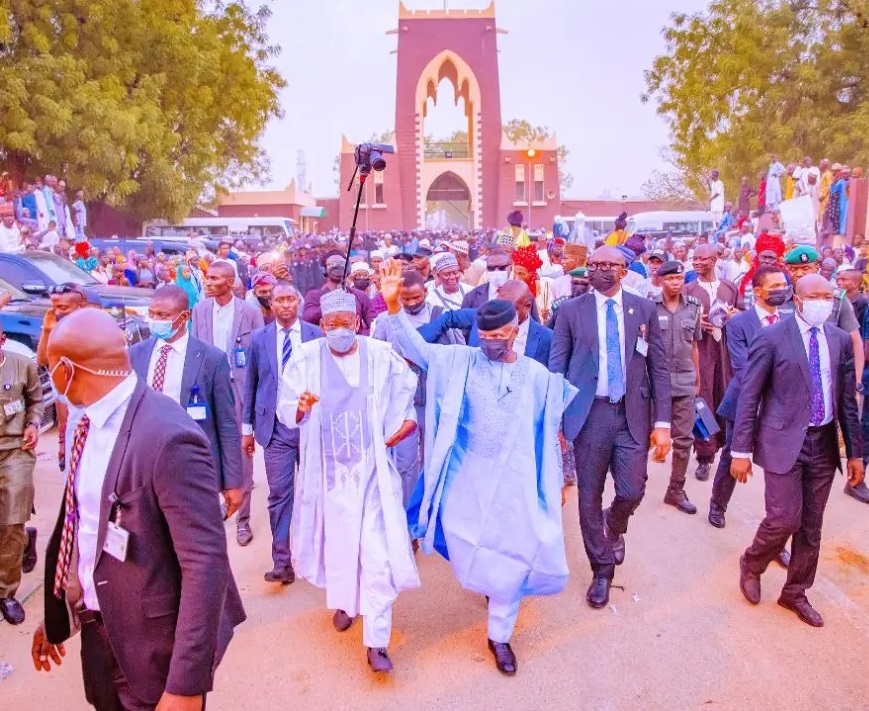 Vice President Yemi Osinbajo says the Kano Durbar festival is not only a spectacle from a city of firsts, but also a symbol of Nigeria’s diverse and beautiful cultures.

Osinbajo’s spokesman, Laolu Akande, in a statement on Wednesday in Abuja, said the vice president graced the Royal Durbar organised by the Kano Emirate Council to commemorate the 2022 Eid-el-Fitr celebrations in the ancient city.

The vice president, who was the Special Guest at the event, spoke with newsmen at the end of the Durbar before proceeding for a courtesy call to the Emir of Kano, Ado Bayero.

Osinbajo commended the organisers and participants at the Durbar (Hawan Daushe).

“The Durbar is an incredible spectacle, so much colour, so much pomp and pageantry, it is very typical of Kano.

At the palace of the Emir of Kano, Osinbajo prayed for the prosperity of the city and its inhabitants.

He thanked the Emir for his hospitality and warm welcome.

“This is to wish you (Emir) well, and wish the people well, and pray that your reign will continue to be peaceful and prosperous.

“I also thank the Governor and pray for peace and security in the state,” he said.

Earlier in his remarks, Bayero acknowledged the contributions of the vice president to the development of the country and prayed God grants him success in all his future aspirations.

The traditional ruler thanked the vice president for attending the event, noting that his presence has improved the status of the event.

“I acknowledge the contributions of the vice president to the development of the country at different times, even as Commissioner of Justice.
“I pray that whatever his future aspiration is, may Allah grant him success.

“The vice president’s visit will further improve the status of the Durbar, not only in Nigeria but also in Africa and the world.

“We look forward to receiving the vice president in the future here in Kano for the Durbar, and we hope to prepare a horse for him to ride on and participate in the Durbar,” he said.

The Emir extended his greetings to President Muhammadu Buhari while praying for peace, security and stability in Nigeria and beyond.

More so, Gov. Abdullahi Ganduje of Kano State, thanked the vice president for visiting the state to witness the Durbar celebration and to pay respect to an institution.

“The institution is important in sustaining the culture, tradition, peaceful coexistence among the various ethnic nationalities in Kano, as well as the socio-economic development of the state,” he said.

The vice president was accompanied on the visit by Senator Kabiru Gaya, House of Representatives Member Hafiz Kawu, Special Adviser on Infrastructure, Ahmad Zakari, and Alwan Hassan among others.