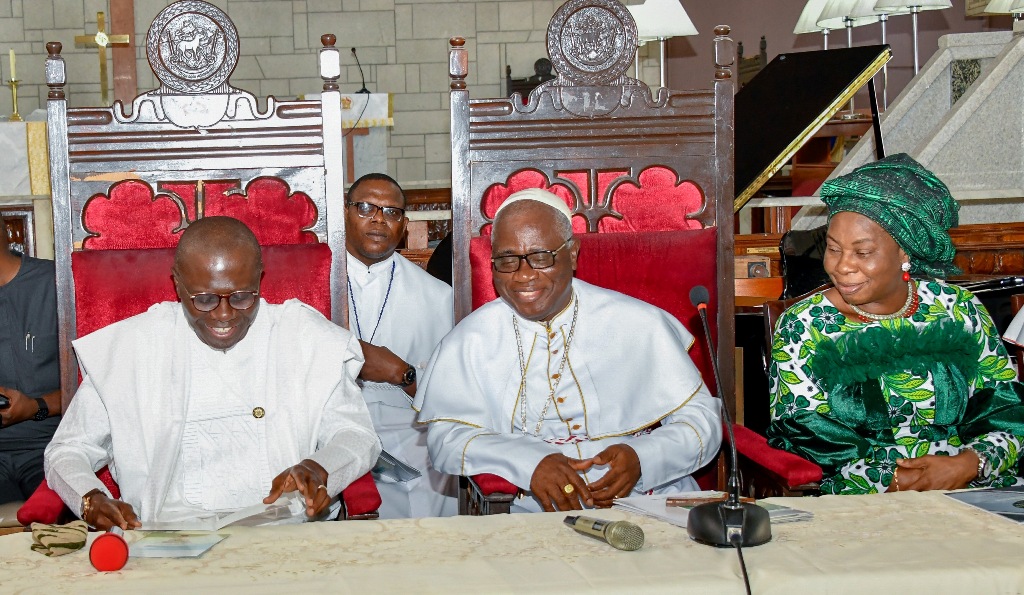 The bishops of the Methodist Church Nigeria have endorsed Gov. Babajide Sanwo-Olu of Lagos State for a second term in office.

The bishops endorsed Sanwo-Olu for re-election in 2023 on Tuesday, during the Opening Session of the 39th Bishops’ Council of Methodist Church Nigeria at the Methodist Church of the Trinity, Tinubu, Lagos.

On behalf of the bishops, the Prelate of the Methodist Church Nigeria, His Eminence, Dr. Samuel Uche, commended the performance of the Sanwo-Olu administration in Lagos State.

He praised the governor for good governance and service to humanity.

Uche said that residents should grant Gov. Sanwo-Olu a second term, to complete the projects he had started and others in the pipeline.

According to him, Gov. Sanwo-Olu deserves a second term, having distinguished himself among his peers in government, as one of the best in governance.

Lagos State Governor, Mr Babajide Sanwo-Olu in a group photograph with Prelate, Methodist Church Nigeria, His Eminence, Dr. Samuel Uche; his wife, Nneoma Folerence Kanu Uche and others during the opening of the 39th Council of Bishops of Methodist Church, Nigeria at the Methodist Church of Trinity, Tinubu, Lagos, on May 3, 2022.

“You (Gov. Sanwo-Olu) are among the best in governance we currently have in Nigeria. For this reason, I urge that you be allowed to go for a second term in office.

“This is so as to complete the enviable projects that you started and others that are in the pipeline. All the bishops in Lagos will mobilise our members, our votes must go to Sanwo-Olu.

“Though, I am not a card-carrying member of any political party, neither am I partisan, yet I value people for who they are and not their political affiliation.

“I believe people like you are the ones we should replicate all over the world. The Bishops’ Council will pray for you and other government functionaries, so that we continue to have a very progressive and development-oriented Lagos State,” he said.

Prelate Uche, while speaking on the state of the nation, urged the government at the federal level to address issues of hunger, inflation and insecurity, as no nation could prosper in the midst of the three challenges.

In his address, Gov. Sanwo-Olu acknowledged the bishops for endorsing him for a second term and assured Lagos residents of the greatest good for the greatest number.

”I humbly acknowledge and thank you for your quiet endorsement of my second term. We cannot afford to fail.

”I stand before you and I have said this over and over, with every fabric in my body, I will continue to serve the people of Lagos.

“We will serve them without fear or favour, ensuring that the greatest good is for the greatest number,” he said.

The governor also announced that his government would pay compensation for missionary schools as they were partners in government, considering their contribution to the education sector in the state.

He also urged Nigerians to continue to trust God for miraculous interventions in their lives, state and the country.

”Our individual and collective challenges are by no means beyond us. Our faith in the Almighty God is able to move mountains. That unshakable faith must be extended into our daily lives.

”We must maintain faith that our country can and will triumph over all its challenges and cement itself onto the path of everlasting progress. For with God, nothing shall be impossible,” Sanwo-Olu said.

He expressed the belief that the 39th Bishops’ Council would come out with resolutions that would move the church forward, and prepare people for the Second Coming of Christ, in line with the council’s theme.

The theme is ”Prepare for the second coming of Jesus Christ”.

All will be well with Nigeria – Obasanjo