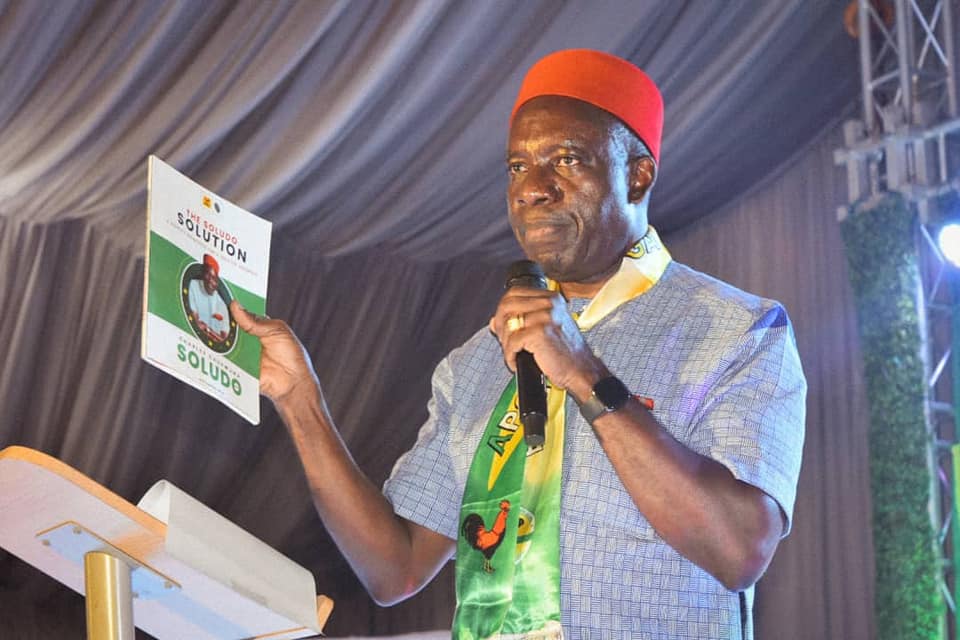 Gov. Chukwuma Soludo of Anambra has declared a state of emergency on infrastructure, especially roads, in the state.

Soludo made the declaration on Wednesday in Awka during a town hall meeting with traditional rulers, presidents-general of communities, youths and women groups.

He said the government would commence massive road construction across the state to ease movement of goods and services.

The governor promised to complete the Anambra Cargo Airport and International Convention Centre and position them to become economically viable.

He said he had reclaimed the state from dirt in the last 49 days through massive waste evacuation and desilting the drains in Onitsha and Awka.

He said that he had also constituted his cabinet within three weeks of his inauguration.

Soludo gave the assurance that all the structures built on natural water channels or drains would be pulled down to make for free flow of water.

He said his administration would retrieve Onitsha from steady degradation and restore it to its old days of glory.

He described the commercial city as the biggest market and preferred destination for business in West Africa.

“We have started desilting Sakamori, where floods wash people away every year from Obodoukwu to Idemili.

“We have started clearing it for free flow of flood water.

“But there is a bad case, people built structures on the drainage from Nwangene to River Niger.

“But I promise that as night follows the day, all those structures must come down.

“Onitsha is the largest city in Anambra, it used to be the largest market, the preferred destination to all.

“But today, Onitsha is dying, while its neighbour is growing fast.

“Our first job is to resurrect Onitsha, the gutters are filled with dirt,” Soludo said.

He further regretted that touts no longer allow visiting businessmen to move freely
“Every available land is covered with structures with no place to park vehicles but our mission is to restore the glory of the city,” he said.

Soludo reiterated the ban on all road tolls, pending when the government completes its collection system for direct payment to the government by automation.

“Transporters will pay revenue to the government, take their receipts and operate all day without molestation,” he said.

He described security of life and property as shared responsibility, which traditional rulers, presidents-general had huge roles to play.

He, therefore, urged the community leaders to revive their vigilance groups.

He promised that the state government would provide funding through a security trust fund, billed to be launched soon.

Earlier, Dep. Gov. Onyekachukwu Ibezim made a presentation of the progress so far made on the clean up in Awka and Onitsha.

Ibezim said about 60 dumpsites in Onitsha and 20 in Awka had been cleared.

He said the intervention committee, which he is heading, would wind down after three months and taken over by the local governments.

He warned residents against indiscriminate dumping of refuse.

He advised them to always use the receptacles and embrace healthy environmental practices.