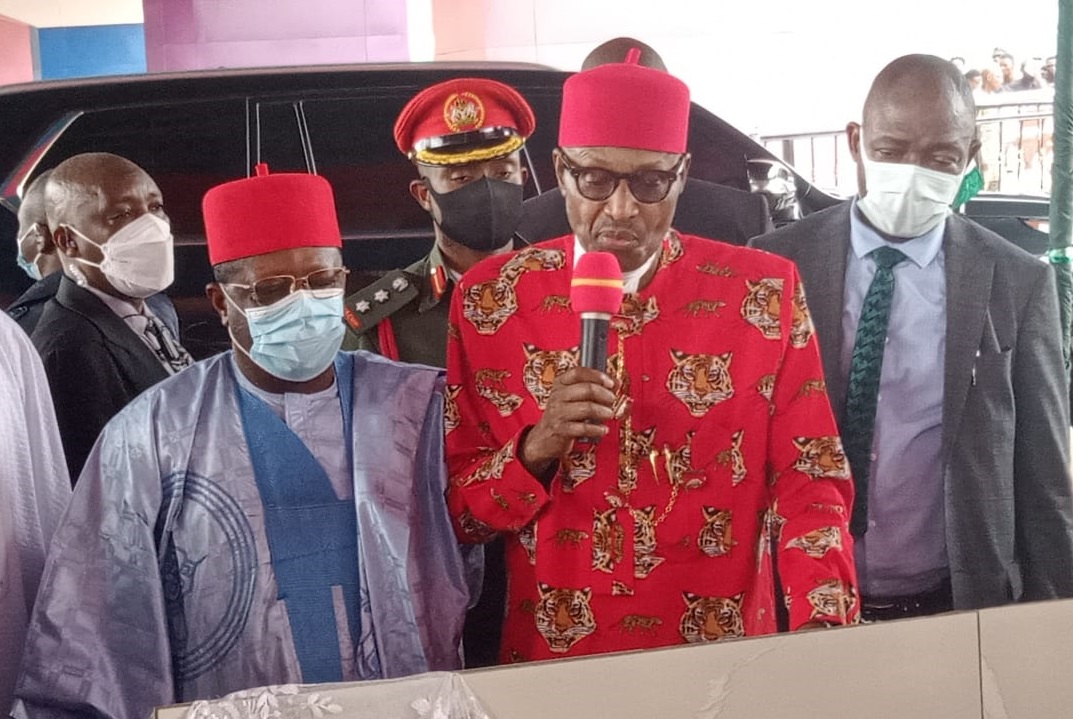 President Muhammadu Buhari has commended Gov. Dave Umahi of Ebonyi on the quality of projects in the state.

Buhari, who expressed his satisfaction with Umahi’s performance said that he was not surprised at the high quality of the projects, describing Umahi, a two-time governor as an engineer of repute.

It was reported that the president began his two-day visit to Ebonyi with the inauguration of projects at the state-owned King David University of Medical Sciences in Uburu.

The projects included a twin flyover, 12-kilometre dualised federal road, from Mpu in Enugu State to Uburu. Among the projects are the university building and the university medical hospital, facilities and equipment.

At his first stop in the state for the inauguration of the 700-metre length twin-flyover (also called King David’s University flyover), constructed at a cost of N2 billion by the State Government, President Buhari said: ”I am not an engineer by discipline but my eyes are very clear, even through my eye glasses.

”I am impressed with this performance and I know the projects will last. I congratulate the governor on this feat and I am pleased to be associated with it.”

Also while in Uburu in the Ohaozara Local Government Area of the state, the president inaugurated a Cancer Centre at the King David University of Medical Sciences, built and equipped by the Federal Government under TETFUND.

Umahi, who thanked the president for approving the funding of the centre, said the facility could rank with similar centres around the world.

“It is in the same standard as the Lagos University Teaching Hospital and the State Government also contributed to the project to bring it to completion,” the governor said.

At the inauguration of the hospital section of the university, Umahi thanked the president for acceding to the request of the State Government on the Federal Government to take over the running of the teaching hospital.

“This hospital is beyond the scope of any State Government to run and we have been celebrating your approval of our request and are very proud that you are here to commission it yourself.

“You have left a lot of indelible marks in the development of this centre of excellence and it will never be forgotten,” he said.

At the inauguration of the presidential lodge at the Muhammadu Buhari International Airport, Onueke, the governor announced that the tarmac and runway of the airport, built with concrete, had attained over 70 per cent completion and would be ready by the end of next month.

The president also inaugurated the five-kilometre dualised airport road in Onueke, built by the State Government as well as the reconstructed St. Margaret Umahi International Market Complex and a 750-metre length twin-flyover near the market.