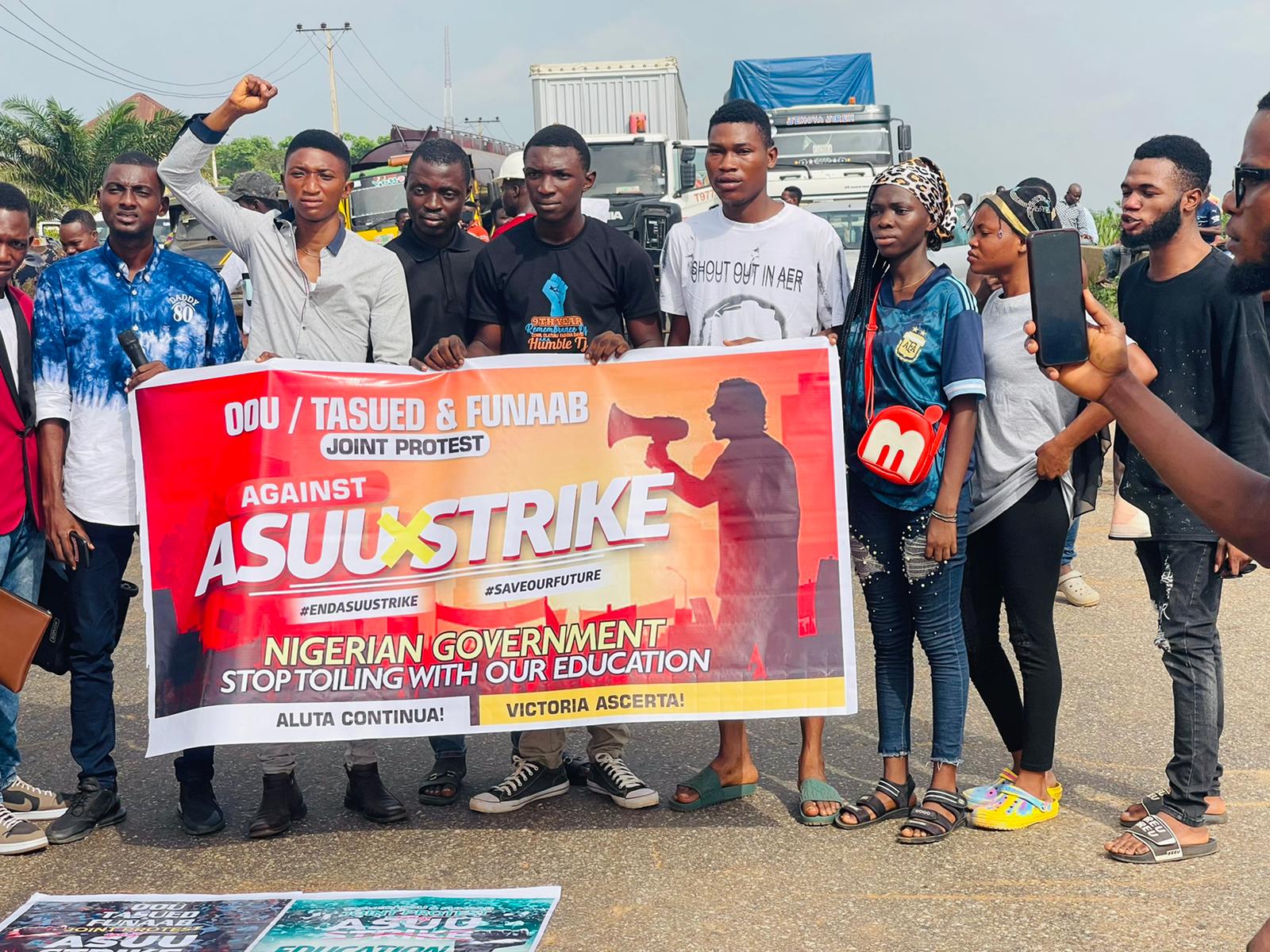 Students in Ogun on Monday blocked the Sagamu-Benin Expressway in protest against the ongoing strike action by members of the Academic Staff Union of Universities (ASUU).

Our correspondent reports that the students stormed the TASUED axis and blocked the expressway leaving many motorists stranded and travellers trapped.

The students carried placards with inscriptions such as “ #End ASUU strike now#”, “ We say no to educational stagnancy”, “ We are tired of deadlock meetings” and “Education should not be this difficult” among others.

Speaking at the protest ground, the Chairman, National Association of Nigerian Students (NANS) in the state, Damilola Simeon, appealed to the federal government to respond urgently to the yearnings of ASUU.

Simeon stressed that it was high time the federal government and members of ASUU agreed and reach a compromise to end the strike.

”We have been clamouring since the commencement of this ASUU strike that something should be done with immediate effect, but both ASUU and the federal government are not listening to us.

“They have to understand the fact that Nigerian students will always be at the receiving end at the end of the day. Our students are suffering, our students are fed up. This whole issue is getting out of hand.

“We do not pray that our students end up engaging themselves in criminal activities as we all know that an idle hand is the devil’s workshop,” he said.

The NANS chairman begged the two parties to do the needful and call off the strike.

Don Ayomide, President, Student Union Government of TASUED, said that the protest was necessary to let both the federal government and ASUU be aware of the plight of Nigerian students.

He added that the federal government should endeavour to respect the agreements reached between the two parties, saying that the students were most affected by the current strike.

Reacting to the students’ protest, Dr Gbenga Adeleye, ASUU Chairman, FUNAAB, told NAN that the students had a right to quality education, saying that they were not happy with the ongoing strike.

“I will only implore them to be civil with the way they carry out the protest. The issue about the ASUU strike is unfortunate, worrisome and pathetic,” he said.

Our correspondent reports that the ongoing ASUU strike started on Feb.14, with a four-week warning to the federal government to reach a common ground on the demands of the union.

The union announced an extension of its ongoing strike by three months which commenced on May 9, to give government more time to satisfactorily resolve all the outstanding issues.