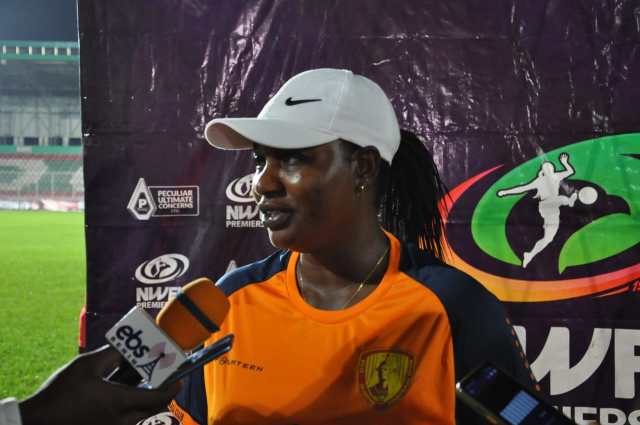 The commission immediately installed as her replacement the club’s Assistant Coach, Niyi John.

He is to take over till the end of the Super Six tournament which helps to draw the curtain on the 2021/2022 Nigeria Women Football League (NWFL).

The Commission’s Chairman, Yusuf Ali, announced the sack after Edo Queens lost 0-1 against the Nasarawa Amazons of Lafia in their second game at the Super six tournament.

“From my own understanding and my findings, I think the coach is not capable. At this point we have to relieve her of her appointment, and let the assistant take over until after the tournament.

”I will now know what to do with the team then. But for now, let the assistant take over,” he said.

Matthew, while speaking on the outcome of the match, had said her players tried their best to score a goal but could not.

”They started well, but they did not play to my expectations.”

Responding to questions on some of the substitutions she made during the game, Matthew said players on the bench were equally good and they played well.

Reacting later to the news of her sack, she said: “Well, if that is what they want, I do not see anything bad about it. But this is not the team that I met here.

“Last year, they were beating them 4-0 in the Super Six. Last year in qualifying for this event, they took fourth, but we took second this year to qualify for the Super Six.

“They lost all their matches last year. We played a draw in our first game yesterday (Monday). Even during the league, we played 10 matches and stayed unbeaten. We were winning away and home matches.

”So, if they have any secret reasons as to why they have do this (her sacking), no problem,” she said.

Matthew insisted that she did well for the team, because it takes time to build a team. “I brought players from 12 different clubs and it takes time for them to work together.”

Our correspondent reports that the match was both sides’ second match at the competition holding at the University of Benin’s Sports Complex.

Flying Eagles qualify for 2023 Africa Under-20 Cup of Nations