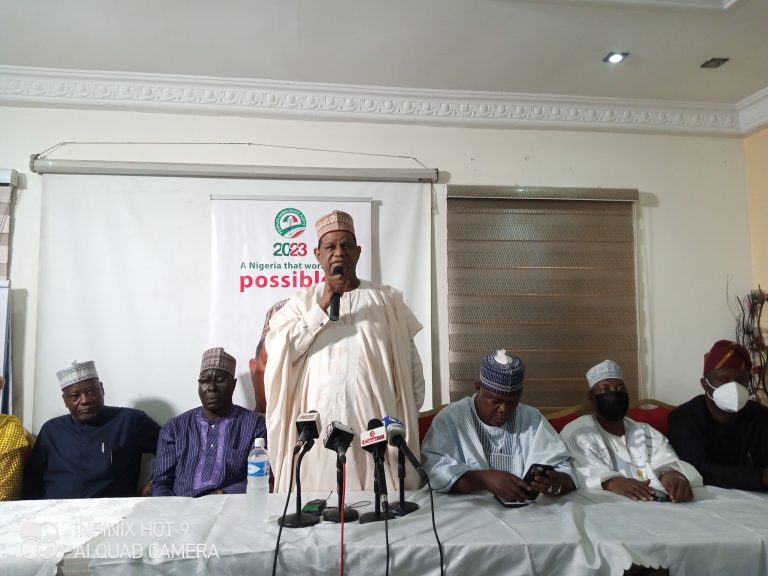 Mohammed Hayatu-Deen, a PDP presidential aspirant, says his plan is to declare National Security Emergency on inauguration day and revamp the economy if elected president in 2023.

Hayatu-Deen, a former Managing Director of the now-defunct FSB International Bank, made the pledge when he led his team to woo Lagos PDP national delegates on Thursday in Ikeja.

The foremost economist, banker and former Chairman of the Nigerian Economic Summit Group , who noted that most challenges facing the nation had economic root, promised to fix Nigeria’s economy with strategic programmes if elected.

“I will deal with National security issues firmly and decisively. I take this job very seriously and I am going to declare a National Security Emergency on May 29 2023, if am elected president.

“I will make sure I pick best hands from every every nook and cranny of this country to run this nation successfully.

“My intention is to completely revamp this society and put it on the world map,” the aspirant said.

Hayatu-Deen said the pillar of national security included economic, social, power, climate and leadership security, which he would prioritise.

He said that Nigeria in time past, had been a very safe, secure, peaceful, entrepreneurial and progressive country, with quality education, flourishing economy, access to utilities and food on the table of people.

On why he joined the race, Hayatu-Deen, who noted that he had always lent a helping hand to various governments, said that he was passionate about the socio- economic and security challenges of the nation.

“I am fully prepared to assume the responsibility of this office. One because of my background and my experience as an economist, a banker, a strategic planner and somebody who is deeply involved in public place.

“I have a tremendous amount of passion. My work ethics are very strong. I put a lot of energies into whatever I do. I like sacrifice.

“I hate to see people without access to the ordinary things that people need for their daily existence.

“I am very concerned about the challenges of this country and I am giving you my all to serve you honestly and sincerely,” he said.

Hayatu-Deen, who noted that he had built a very strong relationship all around the country and travelled wide, said he had the character to discharge responsibility honestly and creditably.

He said that most of the crises faced by Nigeria was largely on account of the broken economy left unattended to for many years.

He said that a flourishing economy would solve problems of unemployment and insecurity.

“Haven been a trusted turnaround manager of six institutions with the kind of issues which I understand about the Nigerian economy, I guarantee you that I have the formula for dealing with these issues. I will spend all of my days and night to ensure that we are able to rehabilitate this economy.”

He promised to stabilise the economy through several strategic reforms, investments and social system, adding that the nation had long been suffering from deep wounds, hence the need to also strenghen the unity of the country.

Hayatu-Deen pledged to sacrifice and do the best for the country by bringing together, credible men and women who would help in economic and social re-engineering of the country.

He added that there was the need for continued equity, fairness and justice to move the nation forward.

The aspirant, who sought the support of the delegates, urged them to understand that their future and that of their children and grandchildren as well as the nation depended on their votes.

“So, May 28, 2022 is going to be a watershed and we should see it as an opportunity to give a better future to our children. I have every confidence that on that day, we will get the votes from your side,” he said.

Our correspondent reports that the event was attended by Lagos PDP state and local government excos, national delegates and other chieftains of the party.

FRSC advises “Okada riders” to be safety conscious in Osun