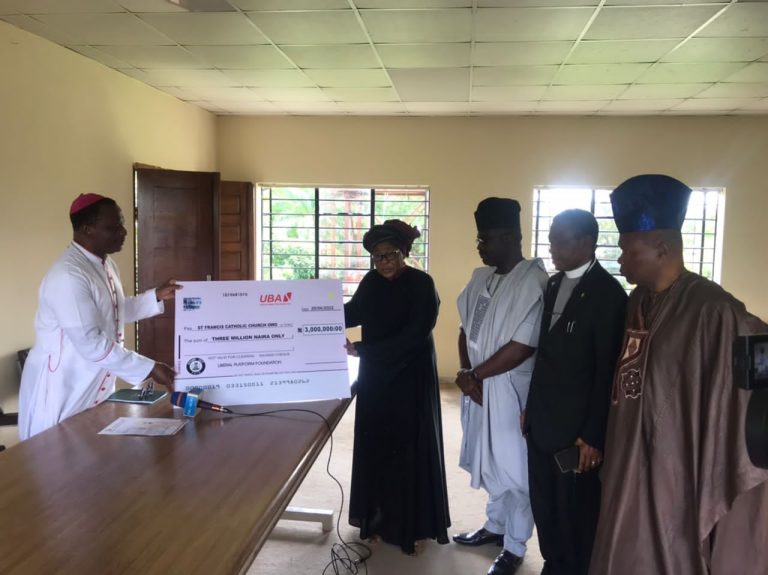 An NGO, Liberal Platform Foundation, on Wednesday donated the sum of N3 million for the treatment of the victims of June 5 terror attack at St. Francis Catholic Church, Owo, Ondo State.

Pa Ademola Ijabiyi, Founder of the NGO, while presenting the donation to the Bishop of the Ondo Catholic Diocese, Jude Arogundade, in Akure, said that the attack had enormous effects on the state and the country.

Ijabiyi, who said that Nigeria was at the verge of precipice, stated that it was worrisome that government failed to protect the victims.

He noted that the attack seemed to have been a fight back to Gov. Rotimi Akeredolu’s stand on the state security apparatus.

He said that it was alarming that church, being a sacred place, could be hit with such heinous attack.

Ijabiyi, therefore, said that something must be done to relieve the victims in all ways.

“In the mean time, we must do something. Our organisation is very small but we have put our resources together to support the church in our little way.

“We know that the church will overcome trials and persecution facing it. We are conscious of damages and we are greatly worried,” he stated.

Arogundade, while appreciating the NGO, said that the donation was a show of care to the victims of the attack.

The cleric recalled that the attack was shocking, adding that he took it initially as fake news until pictures from some individuals and a call from the state governor confirmed it.

He described the scene of the attack as war, saying that the perpetrators lacked basic human nature.

The bishop said that the World was watching and would act for accountability.

According to him, some of injured people are still in hospitals, citing some cases that need sophisticated health treatment and promised that all money received will be utilised judiciously.

“We will do everything to make children of the victim’s get to anywhere they want. Thank you for this handsome money.

“We will take everything through a process. I know that if we do it well, none of them will know poverty,” he said.

Ijabiyi also visited the Olowo of Owo, Oba Ajibade Ogunoye, to commiserate with the traditional ruler and the community on the incident.

“We are here to commiserate with you on the June 5 attack at St. Francis Catholic Church. It is a terrible situation for the state and the country.

“One thing that can ameliorate this is the arrest of the killers. First, it was daughter of Pa. Fasoranti, then killing of Olufon of Ifon and now Owo.

“We believe that something must happen, otherwise, they will come back, God forbids,” he said.

Responding, Ogunoye thanked the foundation for joining the town in the grief, adding that the effect of the incident was not only on Owo but on the Yoruba and Nigeria.

He said that the palace did not envisage such attack, considering Owo as a peaceful environment.

According to him, the incident has affected the morale of residents and the palace has put in place necessary things to prevent occurrence.