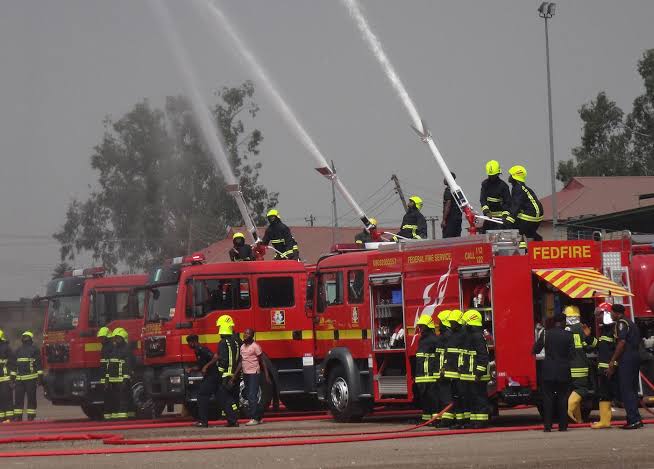 Adebuola told our correspondent in Ibadan on Friday that the call was in respect to the Monday’s fire incident that razed down about 33 shops with goods worth millions of Naira destroyed.

According to him, the market comprises both the plank and the 30-30 ram sections.

“The market needs the government to build a fire station within it to promptly attend to future fire outbreak in the market in order to prevent loss of lives and property.

“If a fire station is located within the market, this will fast track the response of fire fighters and reducing the time to get to the scene of a fire outbreak,” he said.

He also called for the lightning of the market, saying it was needed to aid security measures in the market, thus curbing goods from being stolen.

“It will also help traders who arrive late from where they had travelled to buy their goods,” Adebuola said.

The market leader, who also prayed for the provision of modern toilet facilities, said several letters had already been written to the Chairman of Aare Latoosa Local Council Development area in this regard.

Adebuola pleaded with the government to repair roads within the market to enhance smooth movement of people and goods.

Our correspondent recalls that an early morning fire outbreak wrecked havoc at the Idi-Igi Lane of the market, where provisions sellers, beans sellers and people selling sacks were mostly located.

Meanwhile, one of the victims, Alhaji Musa Bogobiri, who claimed to have lost goods worth about N7 million, called on the state government for assistance.

According to him, my livelihood and that of others in my shoes had been denied by the incident.

Another trader, Mrs Rashida Talabi, said it was difficult to estimate how much she lost, because most shop owners bought goods on credit to make sure they had enough to sell for the festive period.

The Director of Operations, Oyo State Fire Service, Mr Ismail Adeleke, had said that the Monday morning fire incident at the Bodija Market in Ibadan, was aided by several kegs of petrol stored in some of the shops.

Adeleke, however, said that agency was still investigating the main cause of the fire incident.

According to him, one Ayo Akeredolu from Yemetu Police Station, Ibadan, called at exactly 5.35 a.m. on Monday to inform the agency about the inferno.

“We responded quickly with a 27,000-litre capacity truck with water to the market and started putting the fire under control.

“Another 10,000-litre capacity truck also joined in our operation to finally put off the fire.

“However, in the course of our operation, we discovered that grinding machines were in most of the shops with some kegs of petrol, which contributed to the spread of the inferno.

“But, we thank God that we were able to put off the fire before it spread to the fourth block,” he said.

Adeleke said that further investigation would reveal the main cause of the inferno.

He, therefore, cautioned residents, especially traders to desist from careless storage of inflammable substances, not minding the scarcity of petrol as currently being experienced in the state.

It was recalled that three blocks, comprising 11 lock up shops per block, situated at Ori-Igi Lane in the market, were affected by the fire.

Property worth millions of naira were also estimated to have been razed down by the inferno.