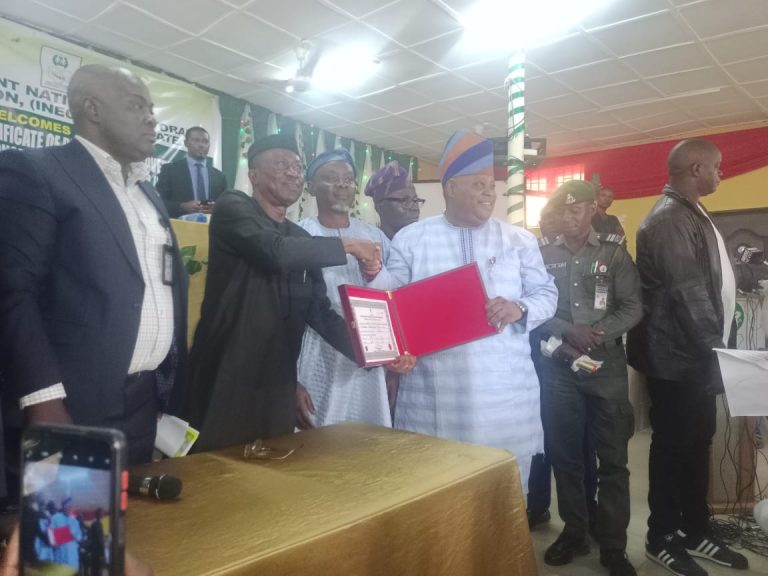 The presentation of the certificate came about 72 hours after Adeleke was declared the winner of the Saturday governorship poll.

Adeleke polled 403,371 votes to defeat the incumbent Gov. Adegboyega Oyetola of the All Progressives Congress (APC), who polled 375,027 votes.

Ajayi, commended the people of the state for the peaceful way and manner in which they conducted themselves during the election.

He said that the voter turn-out was large and there was no major electoral violence incidence recorded during the election.

The commissioner said the introduction of innovative technologies and processes such as the use of; Bimodal Voter Accreditation System (BVAS), INEC Election Result Viewing Portal, Election Risk Management tools, Training for Corp members among others, had significantly geared INEC towards delivering seamless voter experiences to the electorate.

“Indeed, the election was perhaps the most anticipated election of the year, not just because it was the last major off-cycle election before the 2023 General Election.

”But also, it was the first major election after the highly rated Ekiti Governorship elections, which was viewed by Nigerians with a note of caution.

”However, with the successful conduct of the Osun governorship election, the Commission would like to assure Nigerians that this has become the standard of Election Management in Nigeria.

”On the part of INEC, as an electoral umpire, under the leadership of the Chairman Prof. Mahmood Yakubu, we are consistent in achieving our vision to become one of the best election management bodies in the world and acting on our core values of; independence, impartiality, neutrality and transparency”, he said.

Ajayi said the certificate was issued in consonance with the provision of Section 72 (Sub section 1), which mandated INEC to issue a sealed Certificate of Return to the Governor-elect and Deputy Governor-elect within 14 days after declaration of result by the Returning Officer.

In his remarks, the INEC Resident Electoral Commissioner, Prof. Abdulganiy Raji, commended members of staff of INEC in general under for displaying absolute professionalism and commitment to ensure the election outcome was generally acceptable.

According to Raji, our democracy will be stronger if we come together to do the right things such as campaigning with fulfilable promises, modeling positive attitude and behavior while in office.

“Abiding by these steps will not only make life easy for INEC, but also ensure hitch free electoral processes”, he said.

Responding, Adeleke thanked the people of the state for their support for his victory.

He said with his election victory, the state would move forward to a brighter future.

”This victory will not have been possible, but for the goodwill of the patriotic men, young and old, who worked hard to make sure we reclaim our stolen mandate.

“I am overwhelmed by your love and support and I do not take this trust you have bestowed on me for granted.

“Our state has now turn to a new page and we can now look forward to a bright future and a path for progress and prosperity for our people.

“I dedicate my victory to my late brother, the first executive governor of the state, Isiaka adeleke and every indigenes of Osun state and to all my supporters, friends and families”, he said.

Our correspondent reports that INEC, on Sunday morning declared Adeleke as the winner of the Saturday’s governorship election in the state.

Our correspondent reports that the PDP won in 17 local government areas, while APC won in 13.