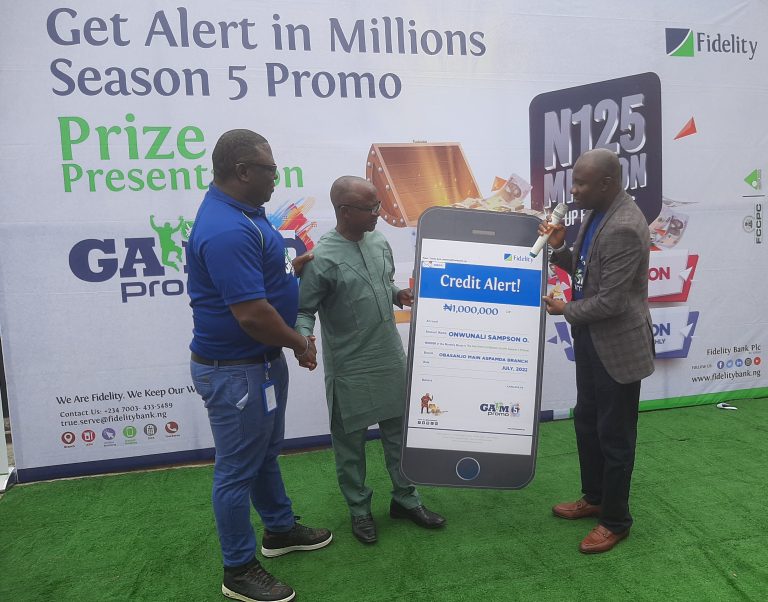 Fidelity Bank Plc has rewarded 10 customers with N1million each in the eight monthly draw of its Get Alerts in Millions season five promo (GAIM 5).

Dr Ken Opara, the Promo Chairman and Executive Director, Lagos and South-West, said at the prize presentation on Wednesday in Lagos that the promo was aimed at promoting financial inclusion.

Opara said that the GAIM was introduced by the bank to support the Central Bank of Nigeria (CBN) financial inclusion agenda across the country.

“Today, we would be presenting the sum of N1million each to Victor Chimela Ohanmuo and Sampson O. Onwunali, who emerged winners in the eight GAIM 5 monthly draw held last week.

“Aside from these customers, eight other winners would receive their cash prizes of N1 million at similar events at their branches across the country at this period.

“I congratulate our winners for emerging winners in our July monthly draw; a million naira is a lot of money and I urge them to put their winnings to good use.

“As a bank, we have taken it upon ourselves to help them make the best use of their cash prizes so that it continues to yield bountiful rewards for them,” he said.

Opara urged them to visit any Fidelity Bank branch for necessary guidance from the bank’s dedicated team of Small and Medium Enterprises on best to make use of their monies.

He noted that the GAIM 5 journey started in November 2021 when the bank launched the promo to reward its customers for maintaining a healthy savings habit.

Opara expressed joy over the reception that the campaign had enjoyed as well as its impact on the lives of winners.

He said that since the first prize presentation event in December 2021, the bank had given out millions of naira to monthly draw winners cutting across all cadres of society.

Opara encouraged those who were yet to open a Fidelity Bank savings account to do so in order not to miss out on the millions of naira to be given away in next month’s monthly and grand draws.

He said, “as we have said previously, we would be giving out the sums of N2 million, N5 million and N10 million each to three lucky customers in the grand draw, scheduled for August 2022″.

Mr Sampson Onwunali, one of the winners from Fidelity Bank Trade Fair Complex, Badagry Expressway, Lagos, thanked God for using the bank to bless him with a worthy prize.

“My heart is full of joy and I thank God for His mercy; when I got a call from the bank that I have won something, I didn’t believe it until I went to my branch to confirm.

“I didn’t even know that there was a promo going on, though I heard about it sometime ago but I had no interest in participating not to talk of even being one of the winners.

“I want to tell Nigerians that Fidelity Bank is a good bank and the save and win promo is real; I advise people to start banking with Fidelity Bank to also be among the winning team,” he said.

All you need to qualify for the promo is save a minimum of N2,000 only and activate a virtual or physical debit card to get a ticket in the promo.

The more tickets you get, the more chances you get to win, and the bigger the amount you can win.