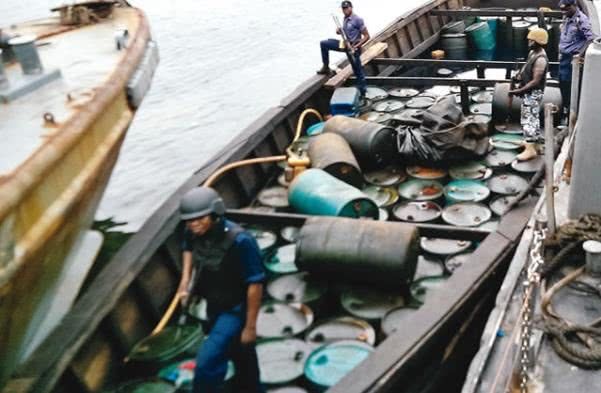 The Nigerian Navy says it has handed over to the Economic and Financial Crime Commission (EFCC), 70 out of 147 vessels arrested over illegal oil bunkering and crude oil theft.

Rear Admiral Emmanuel Ogala, Director of Lesson Learnt, said this at the resumed investigative hearing of the House of Representatives ad hoc committee on fuel subsidy probe on Thursday, in Abuja.

He said the Nigerian Navy did not have the power to prosecute arrested vessels, adding that arrested vessels and person’s were usually handed over to security agencies and in most cases EFCC.

“From our record, 70 have so far been handed over to EFCC out of about 147 vessels that were arrested while others were handed over to other agencies,” he said.

He said that a total of 14 vessels arrested were handed over to the owners who had been acquitted of the cases against them.

He said in the records of seizures made in respect of petroleum products arrested over illegal oil bunkering and crude oil theft, a total of 127 vessels were involved in different forms of offences.

He said that a total of 40 vessels were arrested particularly in 2017 and 9 in 2021, adding that it had provided details of the vessels arrested including the ones handed over to the prosecuting agencies.

“Now to the record of prosecutions, in respect of arrest made during seizure, Nigerian Navy does not have the statutory responsibilities or power to prosecute arrested vessels.

“Arrested vessels and persons are usually handed over to security agencies in most cases EFCC.”

He said the NNPC and the Pipeline and Product Monitoring Company (PPMC) usually sent copies of letters with details of vessels permitted to lift oil products in and out of the country to the Nigerian Navy.

“The Nigerian Navy wishes to state that we remained resolute to carryout our constitutional mandate and other assigned mandate and always available and ready to provide information.”

Rep. Mark Gbila (PDP-Benue) a member of the committee, said that the divulgence of additional information by the navy showed some level of patriotism.

“The Navy, I believe, should have its own authentic verifiable information.

“I have not seen the name, location and ownership details of the vessels in the information provided and this will help due diligence in the investigation.”

He said that the committee needed details of import of fuel, crude and owners of vessels, adding that the information did not clearly indicate the agency the vessels were handed over to.

He said that the record of owners and content of the vessels were not stated, including the arresting unit and data nomination centres from 2017 to 2021.

Rep Cook Olododo (SDP-Kwara) also asked the Navy its views on the way the agency was handling the arrested vessel.