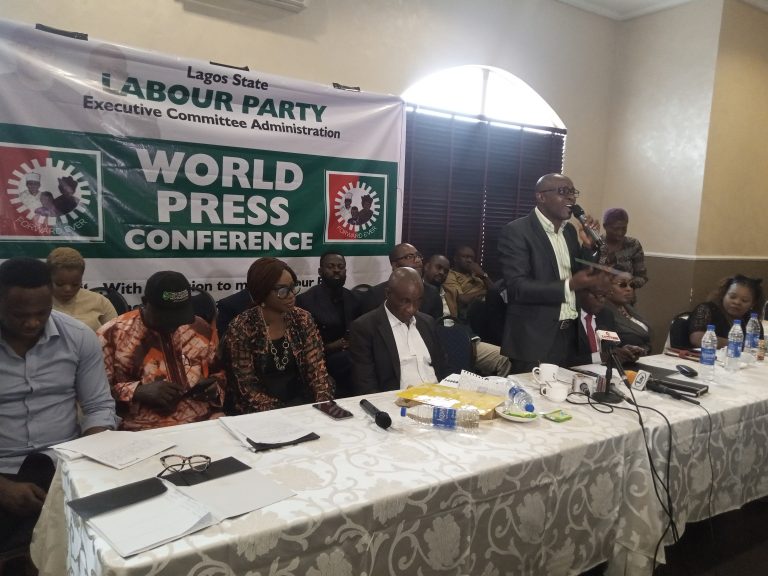 The Labour Party (LP) has unveiled its newly constituted 24-member Caretaker Executive Committee for Lagos State, to run the affairs of the party ahead of the 2023 general elections.

The new executive committee led by Mr Olukayode Salako, was unveiled at a news conference in Ikeja on Tuesday.

Salako, who presented a letter of appointment of the committee signed by the National Chairman and Secretary of the party, Mr Julius Abure and Alhaji Umar Ibrahim respectively, said that the committee had the mandate to reposition the party for winning elections.

He said the committee became imperative following the expiration of the tenure of the outgone appointed state executives, as well as the recent expansion in the party nationwide ahead of 2023.

“This is the brand new LP executive committee in Lagos state. It is constitutionally, legally and lawfully constituted by the national executive body.

”I have here a letter to that effect duly signed by the national chairman and secretary of our party.

“They signed the letter which brought about the constitution of this state executive administration, to run the affairs of the party henceforth in Lagos state.

“There is no faction of LP in Lagos state. It doesn’t exist and it has never existed and it will never exist,” he said.

He said the National Executive Council of LP had written to the Independent National Electoral Commission (INEC) on the newly constituted state executives of the party in Lagos state.

Salako said the committee was appointed just like the outgone committee headed by Prince Ifagbami Awamaridi, and it would serve for a period of three months.

“The constitution of Labour Party allows appointed State Executive Committee. This is a caretaker committee and our tenure will only run for three months.

“Our goal is to find the party where it is and reposition it to win elections in Lagos state. We are also to prepare the party for the next state congress.

“Our operational mission and vision for the party in Lagos is to make the Lagos it the next ruling party. Our vision is to form the next government in Lagos state someday soon.

“We have the mental capacity, ability, experience and social- political will, and we are very sure Nigerians are behind us as ‘Moses’ of the time.

“Our party is poised to take over the affairs of running governance in Nigeria. We are determined because we have the social will of the ordinary people of Nigeria,” Salako said.

He urged Nigerians to utilise their Permanent Voter Cards (PVCs) in 2023 to create the kind of leadership they wanted.

The chairman said the committee would run the party and sell it to every household in Lagos state.

Also speaking, Chief Sam Okpala, the state Secretary of the committee, said that the party was open to all freedom-loving Nigerians both young and old, “Labour Party is the party for the youths.”

He urged the electoral umpire to look into the possibility of extension of voter enrollment which ended on July 31, for more eligible voters to register.