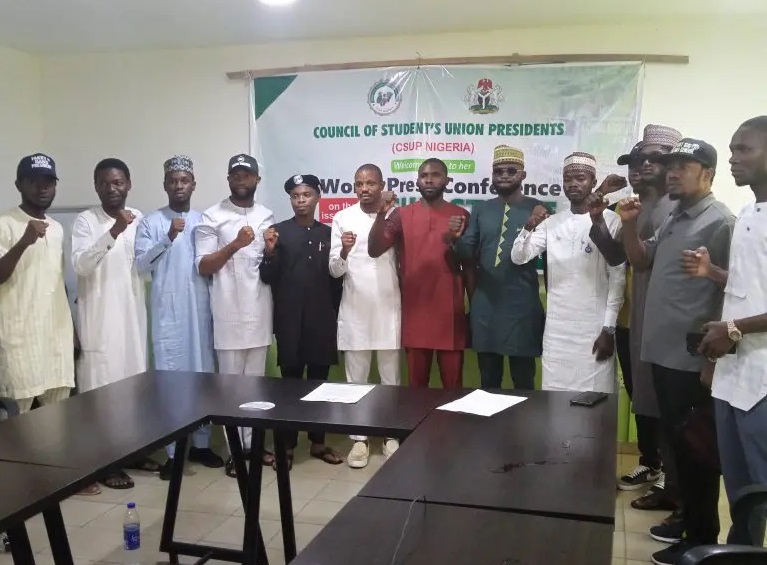 The Council of Student’s Union Presidents (CSUP) says that it is losing students to incessant killings from bandits attacks as a result of their prolonged stay at home due to ASUU strike.

The Student Union President (SUG), Federal University of Technology (FUT) Minna, Mr Ishaka Yahaya spoke on behalf of all SUG presidents across tertiary institutions at a news conference in Abuja on Thursday.

Yahaya said that many students who were to be in school but resorted to doing other jobs were being kidnapped and killed in the process.

He appealed to the government to look into the demands of ASUU and attend to them so that they could return to school.

“It is true when they say, when two elephants meet; only the grass suffers.

“It is quite obvious here that both the Federal Government and ASUU have nothing to lose in this fight.

“This is because while the strike is ongoing, the salaries of Federal Government staff keeps flowing and at the end of every strike, nothing stops the salaries of ASUU members from also flowing.

“The only most unfortunate and innocent victim here you would agree with us are the Nigerian students, who have everything to lose.

“Even when the strike would have been called-off, so many of the students will not be able to serve the nation due to age limit.

“So many students after graduation would not be able to get government jobs due to age limit consideration,” he said.

Yahaya said that the strike had increased the rate of drug abuses, prostitution and thuggery amongst other corresponding wantonness and purposelessness by the Nigerian students who under normal circumstances should be in school acquiring knowledge.

He said that the Nigerian students and campuses had been exposed to insecurities and as such students had now become daily victims of kidnapping by the bandits.

He said that the CSUP had written to the Ministry of Education, issuing a seven days ultimatum to reach an amicable resolutions with their counter parts – ASUU.

He said that failure to do so would lead to the mobilisation of students across the country in a mass peaceful demonstration to end the strike.

“We hereby appeal to the Federal Government to meet the demands of ASUU within the shortest period of time as failure to do so would leave us with no option than to go ahead with our peaceful demonstration even amidst this security instability.

“For it is better to die for something than to live for nothing.”

Also, the SUG president of university of Jos, Mr Danladi Adankala, recalled an incident that happened to a 500 level student of the Ladoke Akintola University of Technology (LAUTECH), Ogbomosho who was kidnapped and murdered after paying ransom.

“In LAUTECH yesterday, a 500 level Rachael Opadele of the Department of Fine Art was murdered.

“She was supposed to be in school finalising her education but because of ASUU strike, she opted to work in an hotel were she was kidnapped and killed after paying ransom.

“This is one of the many we know. Students can also be killed during protest, so it is essential for the government to meet the demands of ASUU so that students can return to school,” he said.

In the same vein, the SUG President, Nasarawa State University, Keffi, Mr Naajim Gbefwi called on the government to prioritise education in the interest of Nigerian students.

It was reported that ASUU had been on strike since February demanding the adoption of UTAS against IPPIS, funds for the revitalisation of public universities.

Others are refusal to honour the 2009 agreement between the Federal Government and ASUU, among others.