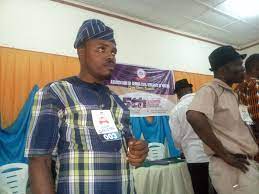 The Oyo State chapter of Association of Senior Civil Servants of Nigeria condemned in strong terms the false claims
and many lies of Mr Andrew Emelieze who is an expelled member, talking from the angle of frustration.

The statement added: ”The claims that he was arrested and taken to alagbon on the ground of financial mismanagement of the union’s funds is clear misinformation of our members and the general public. Andrew’s unacceptable act against the union is as a result of his frustration for being dismissed by the union and he his all out to dent the image of the union.

Balogun further clarified that ”as the Oyo State chapter Chairman and a member of the National Executive Council of ASCSN, I can tell you affirmatively that the situation in the union is calm and we pass vote of confidence on the Secretary general, Comrade Alade Bashir Lawal and other members of the CWC . We shall at the appropriate time legally charge Andrew and his propagandist co travellers for character assassination at the court of law. I want to urge our members to remain claim, as any further attempt to bring the union into disrepute will not be taken likely.”