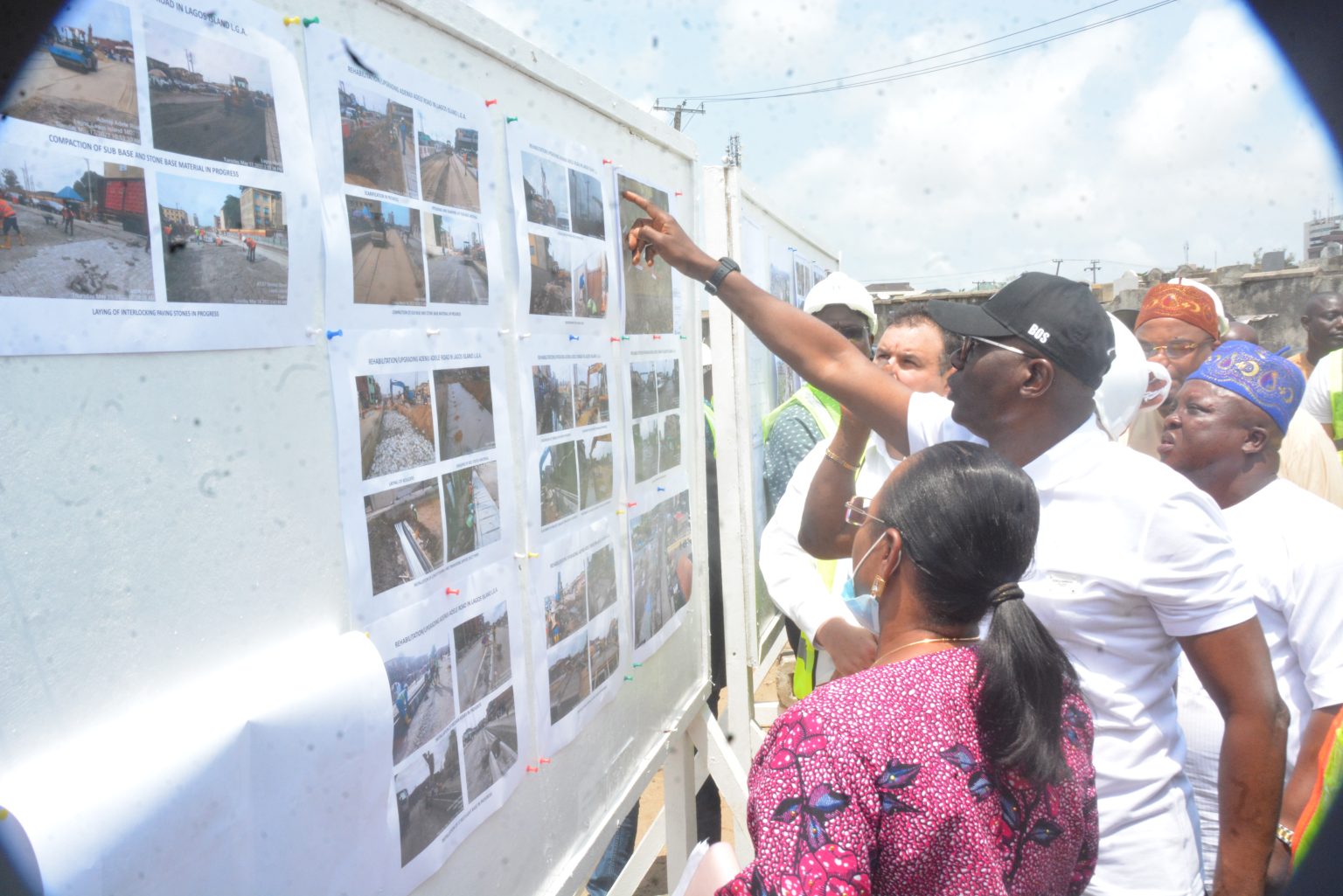 Gov. Babajide Sanwo-Olu of Lagos State on Wednesday, said the state government is constructing a new 1.2 kilometer drainage diversion at Ilubirin area of the state.

Sanwo-Olu made this known while addressing newsmen after the inspection of some projects on the Island, which included Tapa/Oke-popo Adeniji-Adele Road construction, the new Massey Children Hospital, renovation of General Hospital, Odan and laying of three high capacity pumps at Ilubirin drainage site.

He said with the 1.2 kilometers drainage diversion, the issue of flooding at the Lagos Island would soon be permanently resolved.

The governor who was accompanied by some executive members on a four-hour inspection around the facilities, said that with the level of works done so far, the contractors were working as scheduled.

Gov. Babajide Sanwo-Olu of Lagos State (2nd R); Commissioner for Environment and Water Resources, Mr Tunji Bello (3rd R); Permanent Secretary, Office of Drainage Services and Water Resources, Mr Nurudeen Shodeinde (4th R) and others at the site of Ongoing Construction of Ilubirin Housing Estate, during the inspection of some projects on Lagos Island on Wednesday (10/08/22)

”We are constructing a new one kilometer or 1.2 kilometer diversion in front of the Olubirin Housing Estate that will take a big body of water onto the Lagos lagoon and we are expecting three high capacity pumps that I am told will be arriving next month.

”So the bed for the drainage is what we saw and the construction is ongoing, to be able to receive the main pumps when they do arrive.

”What that means is that issues around flooding and drainage issues can be completely resolved in Lagos Island,” he said.

At the General Hospital, Odan which is the oldest in the state, Sanwo-Olu said that the renovations were being done in phases, adding that when completed the hospital would allow more patients.

He also said that the other general hospitals would henceforth be infused with doctors’ quarters, as the one available at the General Hospital, Odan.

”Just to also mention that for the new hospitals we are building, we are trying to also infuse them with doctors’ quarters.

He said that in the last three years, the government had been creative in carrying out extensive renovations in phases in the general hospital, Idan.

Sanwo-Olu said the first phase of renovation was the the Accident & Emergency ward, the Surgical & Emergency, the training room, including the one that a Foundation built for the hospital, which would be for medical tourism.

”The second phase is the pharmacy, the catering and some other parts. I think what we are seeing now is the third phase, which has a high clinic, the admin building, the ambulance bay, the patient’s waiting area and some of the wards, children’s ward, surgical – male and female.

”We are going to another phase which will be the fourth phase, even in this last phase, the pathology department is there, and so there are still going to be a few demolitions that will happen in here, to be able to receive additional patients,” he said.

According to him, the assessment of the reconstruction of Tapa/Oke-popo and Adeniji-Adele Road in Lagos Island shows about 60 to 65 per cent work done, as the contractor has assured completion by end of 2022.

On the construction of the New Messey Children Hospital, he said that the building of the nine-storey car park had started, and was on the third floor.

”However, the main hospital construction for the Massey Children Hospital, all the 547 piling caps have been completed and the contractor has moved to site, and they have assured us that they will work even doubly hard to keep up with the terms of the projects,” Sanwo-Olu said.