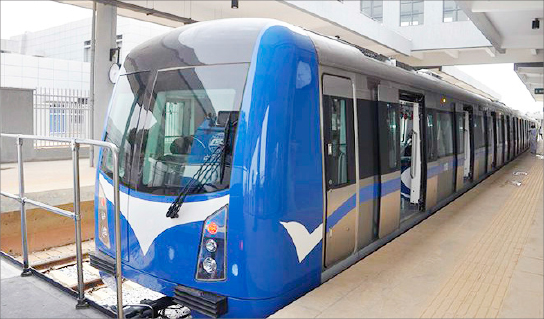 Minister of the Federal Capital Territory (FCT), Muhammed Bello, disclosed this while briefing State House correspondents on the outcome of the Council meeting, presided over by President Muhammadu Buhari, on Wednesday in Abuja.

He said: “I presented a memo at the Federal Executive Council meeting of today and it approved a contract for the provision of security services for the Abuja Light Rail Mass Transit System.

“They are going to provide security to the entire 45 kilometers of track including 12 stations.

“And these security services are meant to protect the key infrastructure on the rail tracks, the signaling and communication equipment as well as the electrical system.

“Al-Ahali security guard Limited is going to secure 27.4 kilometres of the track, covering eight stations at the cost of N407, 214,000 over a two year period.

“Seaguard Securities and Protective Company Limited is going to secure 18 kilometres of the rail tracks including four railway stations and that is at a cost of N310, 979,250.”

The Minister of Transportation, Umar Sambo, also revealed that the council approved N1.4 billion for the purchase of spare parts and repairs of a crane of the Nigeria Railway Corporation.

He said the crane, which plays a vital role in carrying out activities of the corporation, was now broken down and needs to be fixed.

“Today, I had the privilege of presenting before the council, a memorandum from the Ministry of Transportation on behalf of one of its agencies, the Nigeria Railway Corporation, for the purchase of spare parts and to undertake the repairs and overhaul of one of its critical cranes.

“Council considered the memorandum, because this crane is required by the Corporation for emergency repairs of its rolling stock; it has broken down and therefore needs to be fixed.

The minister, who also fielded questions on the suspension of the Abuja-Kaduna railway service following the March 2022 attack on the train, said two issues were delaying the resumption of the train services.

He said these issues included families traumatized over their family members still in captivity of terrorists and the need to have surveillance facilities to monitor the tracks.

According to him, government was looking at the best options in terms of the surveillance including to concession it in a Public Private Partnership (PPP) arrangement.

On the exact timeline to execute the initiative, the minister said:

“If I give a timeline, I’ll be lying to you. It will be insensitive to restart the service if some families weep day and night over their family members still in the bush.”

The minister said the government was mindful of the cost involved, but should be able to report definite progress in about a month.